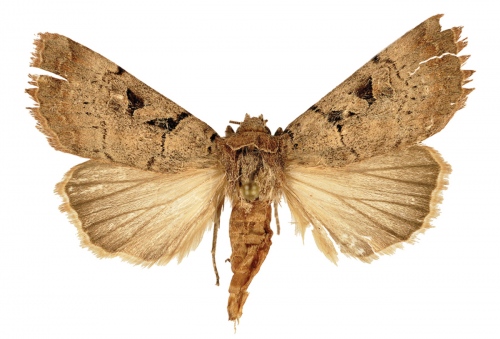 Researchers described a new species of Noctuidae moth from Iran which is the fifth described species of the genus Anagnorisma. The new species A. chamrani has its name in honour of Dr. Mostafa Chamran (1932–1981), an Iranian scientist and defence minister. The study was published in the open access journal Zookeys.

During an expedition at high altitude of above 2500 m of north-eastern Iran on a cold night in late summer 2012, a couple of undescribed specimens of Anagnorisma moths were collected. The specimens had been attracted to an ultraviolet light trap on the Binaloud Mountain near Mashhad city, the capital of the Khorasan-e-Razavi province of Iran. They have a wingspan of 34-35 mm. The new species was collected in a narrow river valley dominated by mountain sainfoin (Onobrychis cornuta), wild almond (Prunus (Amygdalus) scoparia), and downy brome (Bromus tectorum).

A. chamrani is the sister species of A. eucratides, which is only known from eastern Afghanistan at altitudes of 2050 to 2450 m of the Hindu Kush Mountains. A. eucratides is the most similar species to chamrani in the wing pattern, external and genitalia characteristics and it is also the closest geographically.

Owlet moths (family Noctuidae) are a large worldwide group of more than 20,000 species of nocturnal lepidopterans, attracted to lights and mostly have dull protective coloration, although some exceptions occur. Most adults feed on fruits, sap, nectar, or other sweet fluids. The larvae vary considerably in size, and range from dull to colourful and from smooth to hairy. Many species feed on foliage and seeds, whereas others bore through stems and fruits. Larvae of some species are known as cutworms and live in the soil near the soil surface, and they bite off young plants just above ground level at night.