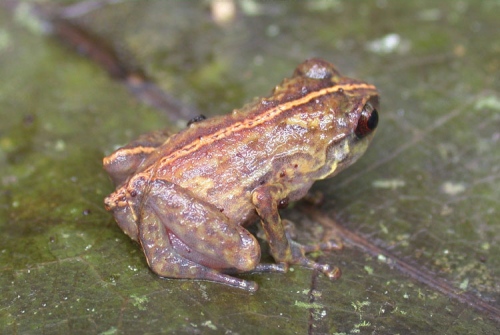 Three new species of tiny frogs from Papua New Guinea are described in the latest issue of Zookeys. Dr. Fred Kraus, University of Michigan, who in 2011 in Zookeys described the world’s smallest frogs Paedophryne dekot and Paedophryne verrucosa, now adds another 3 species from the genus Oreophryne to the remarkable diversity of this region.

The three new species Oreophryne cameroni, Oreophryne parkopanorum and Oreophryne gagneorum are all rather minute, with total body lengths of around 20 mm. These tiny frogs, however are still substantially larger than the species that claimed the smallest frog prize in 2011. Paedophryne dekot and Paedophryne verrucosa are only half of the length of the three new additions to the frog diversity of Papua New Guinea, with an astonishingly small body size ranging between 8-9 mm.

The subfamily to which the new species belong is largely restricted to New Guinea and its satellite islands. Of the constituent genera, Oreophryne is presently one of the largest within the Papuan Region.

“Although the description of the new species treated herein now brings to seven the number of Oreophryne species reported from the north-coast region of New Guinea, the presence from these areas of additional specimens of uncertain identity suggests that additional species likely await description.”, explains Dr. Kraus about the diversity of the genus within the region. “I have at least a dozen more new Oreophryne species remaining to be described from this region, and large portions of this terrane system remain unsurveyed.”