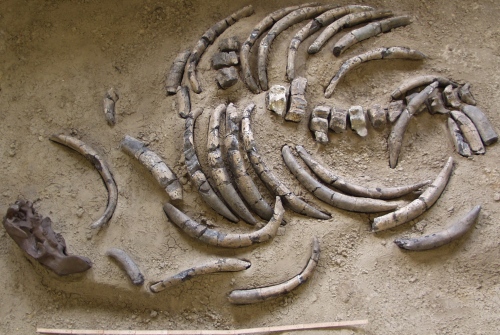 Sirenians, or sea cows, are a particular group of mammals that superficially resembles whales in having, amongst other features, a streamlined-body and horizontal tail fluke. Though belonging to the so-called marine mammals, such as whales and seals, sea cows are members of a group having a single origin that includes their closest living relatives, the proboscideans (or elephants in the broader sense).

Today, sirenians are known by only four species, but their fossil record is much more diverse documenting the transition from land-dwelling animals to fully aquatic ones. This makes fossil representatives of this group not only very fascinating, but also crucial for the understanding of the transition from life on land to the sea and the past diversity of the order Sirenia.

Considering the oldest known member of this order, Prorastomus from the Eocene (~50 Ma – Millions of years before present) of Jamaica, first fully aquatic sea cows already occurred by approximately 42 Ma, which indicates a relatively fast transitional process. Later forms still retained a small femur, which however was no more visible outside. Amongst such sirenians, one species was distributed in a shallow marine area, now occupied by Germany and Belgium, about 30 Millions of years ago in the early Oligocene. This respective species was hitherto known as Halitherium schinzii and believed to represent the only sea cow that evolved in that region to that time.

In a recent publication of the open access journal Zoosystematics and Evolution, Manja Voss from the Museum für Naturkunde Berlin deals with a contrasting hypothesis of two distinct species in the early Oligocene of Central Europe. Considering the always incomplete fossil record, palaeontologists face the challenge to determine species on a material basis being as informative as possible. In the present study Manja Voss provides arguments why this is not the case with the so-called holotype, a single tooth, of H. schinzii and explains why this species name is not applicable to any currently known sirenian.

Additionally, Manja Voss emphasises that consequences are to be drawn including a morphological re-assessment of skeletal material originally assigned to this species and the requirement of new generic names for all species formerly grouped under Halitherium. Moreover, it is acknowledged that this genus does not only include unrelated species, but is also the name giving basis for a subfamily, the Halitheriinae, that is likewise far from forming a single entity. Therefore, the proposed rejection of these specific termini shall help to better handle the known diversity of the sirenian order.