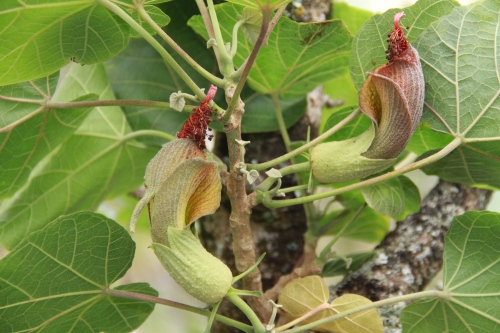 Most people are familiar with Hibiscus flowers – they are an iconic symbol of tropical resorts worldwide where they are commonly planted in the landscape. Some, like Hawaii’s State Flower- Hibiscus brackenridgei – are endangered species.

Only a relatively few botanists and Hawaiian conservation workers, however, are aware of an equally beautiful and intriguing related group of plants known as Hibiscadelphus – literally “brother of Hibiscus”.

Brother of Hibiscus species are in fact highly endangered. Until recently only one of the seven previously known species remained in its natural habitat, the other having gone extinct. These trees are only known, or were known, from five of the eight main Hawaiian Islands. Two are still alive in cultivation, saved in part because of their beautiful showy blossoms. Several were only known from a single wild tree.

Remarkably, in 2012 field botanists Hank Oppenheimer & Keahi Bustament with the Plant Extinction Prevention Program, and Steve Perlman of the National Tropical Botanical Garden found a population of these unique trees in a remote, steep valley on the west side of Maui, near the resorts areas of Lahaina and Ka`anapali.

Until then the trees have never been known from this area. After careful study at the Bernice Pauahi Bishop Museum in Honolulu and elsewhere, comparing the new trees with all those previously known, it was concluded that these represented a species new to science. Even more astounding was the number of trees found – 99 – which is likely more than all the other species ever known combined. The study was published in the open-access journal PhytoKeys.

Co-discoverer Steve Perlman (now with the PEP Program) has done rough terrain field work on all the Hawaiian Islands as well as throughout the tropical Pacific since the 1970’s. “It was certainly a highlight of my life to be there knowing we found Hibiscadelphus” he said. “It makes me feel good to know all that hard work we do sometimes pays off.”

“What an important find” said Maggie Sporck, State Botanist for Hawaii’s Division of Forestry and Wildlife. “I loved hearing Hank tell the story about this.”

Hawaiians know these trees as hau kuahiwi- hau being a type of lowland Hibiscus common throughout the tropical Pacific, and kuahiwi referring to its upland or mountain habitat. They recognized their similarities while keenly observing their differences.

“Every new species discovered is exciting but this species, belonging to such a unique endemic island lineage, is more special than that” said Dr. Art Medeiros, biologist with the U.S. Geological Survey on Maui. “Besides being beautiful, it is a true contribution to Hawaiian natural history.”

For more information about the Plant Extinction Prevention Program and the National Tropical Botanical Garden see http://www.pepphi.org and http://www.ntbg.org