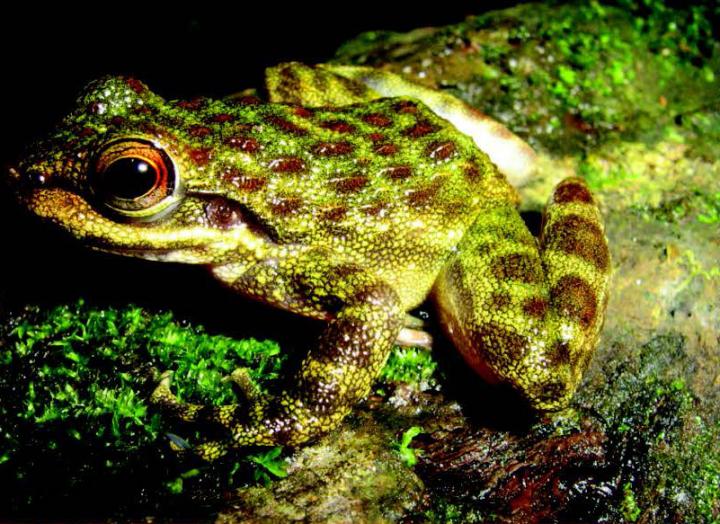 No earlier than last year, did the first, and up until recently only, endemic to Upper Guinea family of torrent tooth-frog come to light. Now, Dr. Michael F. Barej from the Museum für Naturkunde, Berlin, and his colleagues verify the existence of as many as four new highly endangered species. In their study the researchers provide crucial insights for the conservation of the biodiversity hotspot. Their research on the suggested existence of a complex of cryptic (structurally identical) species is published in the open-access journal  Zoosystematics and Evolution.

Suffice it to say, the family name derives from the frogs’ unique jawbones featuring tusk-like appendages on the bottom jaw and curved upper teeth. Meanwhile, the tadpoles are equipped with a sucker-like mouth. While easy to distinguish from the rest West African tooth-frog families, the species within the group are overall identical. This is the reason why they have all been assigned to the O. natator species for more than a century.

The present analyses revealed an unexpected high molecular variation. This and complementary biogeographical patterns made the presence of additional species in this presumably monospecific (comprising only one species) frog family likely. The description of four new species by Dr. Barej’s team is based on combinative analyses of genetics and morphological characters.

The researchers also claim that “recognition and description of species is just a first step which provides the baseline for subsequent studies to gather further data on the ecology or behaviour – or simply: naming does not mean knowing a species”.

The presented results call for the IUCN Red List category “Endangered” for all of the newly described species. These frogs occur along strong currents, cascades and waterfalls in the few remaining patches of primary forests in West Africa. The scientists fear that all “West African torrent-frog species are at risk of becoming extinct because of habitat loss in the Upper Guinean biodiversity hotspot, whose “true” biodiversity is still far from being completely known”.

The increase of species in this unique lineage and their distribution pattern further encourages other researchers to search for cryptic and undescribed species in the forests of the Upper Guinean biodiversity hotspot. Here the scientists highlight its vulnerability by assessing the morphological variation of all known populations of West African tooth-frogs through molecular techniques.