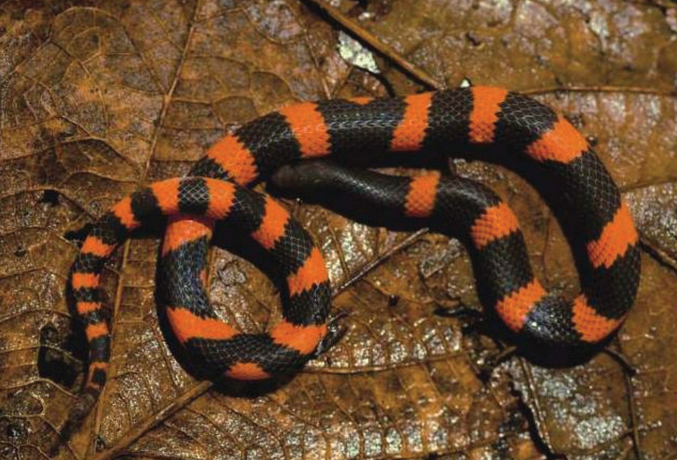 A new gem has been added to the vast treasure of Mexican reptiles. Mexican scientists recently described a new and strikingly colored species of earth snake from the mountains of Puebla and Veracruz in east-central Mexico.

These burrowing reptiles are seldom encountered and, consequently, have been poorly studied. Furthermore, several species have restricted distribution, making them particularly vulnerable to extinction. The description of the new species was published in the open access journalZooKeys.

A sample from east-central Mexico exhibited a unique set of traits among earth snakes, one of them showing striking orange and black banding pattern. They realized that these snakes represented a new species and proceeded to describe it in collaboration with scientists Carlos J. Pavón-Vázquez, Universidad Nacional Autónoma de México, and Marco A. López-Luna,Universidad Juárez Autónoma de Tabasco. The specimens of the new species were deposited in the herpetological collections of the Museo de Zoología “Alfonso L. Herrera” and the Instituto Tecnológico Superior de Zongolica.

The new species is the fourth described by Nieto-Montes de Oca and collaborators for the last fourteen years from the Mexican highlands. Funding from the Mexican Council for Science and Technology (CONACYT) has allowed the team to discover other species of earth snake in Oaxaca, Guerrero, and Puebla.

“Most of these snakes have notably small geographic ranges and sometimes are only found in one type of vegetation. This makes them particularly vulnerable to the destruction of their habitat. It is important to know them before it gets too late,” note the scientists.

Genetic data and careful anatomical examination have been vital to understand the real diversity within the group. “These snakes are remarkably similar to each other and it has been only through molecular analyses and rigorous specimen examination that we have come close to understand how diverse they are,” explain the authors.

The region in which the species is found has not been thoroughly explored yet. Therefore, it seems likely that it could yield future discoveries. Additionally, the work made by the researchers suggests the existence of other undescribed species of earth snake.

“Our analyses suggest that this group is more diverse than previously thought. They have proven to be an exciting model to understand the patterns of biological richness in the Mexican mountains,” conclude the authors.