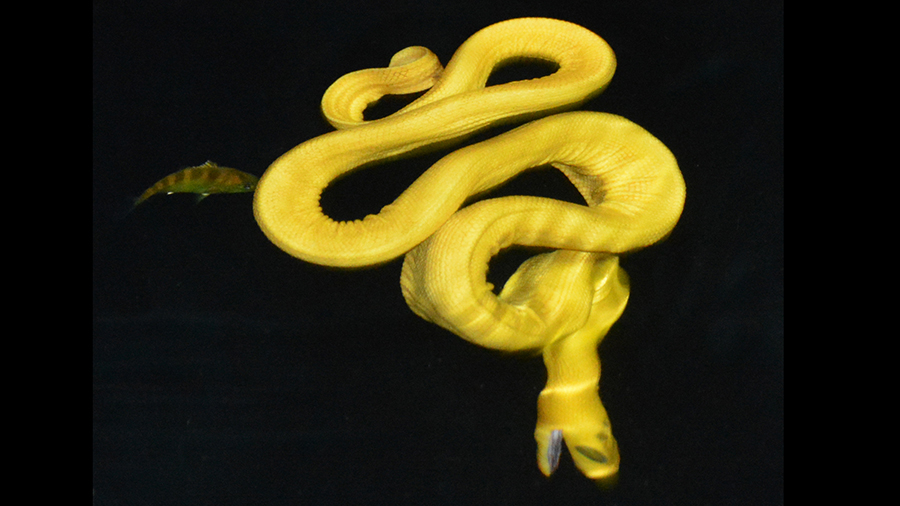 Carrying its petite frame and all-yellow skin, the recently scrutinized sea snake populations from Golfo Dulce, Costa Rica, already seem different enough to be characterized as a new subspecies. However, their most extraordinary trait is only exposed at night when the serpents opportunistically feed on small fish by hanging upside down from the water surface, assuming a peculiar sinusoidal ambush posture.

Unlike its related species, the yellow-bellied sea snake (Hydrophis platurus), the yellow sea snake subspecies lives in a significantly more hostile environment – the waters in the gulf are warmer, often turbulent, and the dissolved oxygen in them occasionally drops to extremely low levels. The two snakes’ territories are separated by some 22 kilometers.

Likely as a result, the new reptile has evolved to hunt at night, while its lighter coloration plays role in thermoregulation.

Given the list of well-defined distinct traits, the new subspecies could eventually turn out to be a new species instead. As for the moment, however, the authors remain cautious until additional data are available.

More importantly, the scientists call for conservation measures to be applied to the new serpent’s habitat. With its very restricted geographic range of about 320 km2 located in a currently unprotected area, the yellow sea snake is at a serious risk of extinction. Collectors have already been reported to remove specimens from the sea. Additionally, the reptiles are already living at the upper edge of the species’ temperature tolerance, which makes them particularly susceptible to climate change.

“Hopefully this globally unique population can continue to offer both scientists and conservation-conscious tourists a worthy subject of observation and study,” say the authors.