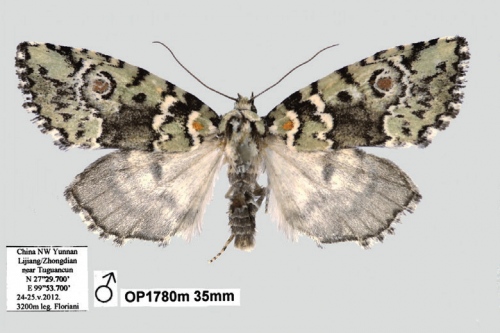 Scientist describe a new striking species of moth from China with an engaging wing pattern. The new species Stenoloba solaris has its name inspired by the orange circular patch on its wings that resembles the rising sun. The study was published in the open access journal Zookeys.

“During a spring expedition to north-west Yunnan, a striking specimen of an undescribed Stenoloba was collected.”, explain the authors Drs. Pekarsky and Saldaitis, “Only a single male was caught at ultraviolet light on 24 May 2012 near Zhongdian in northwest China’s Yunnan province in the remote Baima Xue mountain range. The new species was collected in a wide river valley near mountain mixed forests dominated by various conifer trees, bushes and rhododendron.”

The newly described sun moth belongs to the family Noctuidae, also known as owlet moths, which refers to their robustly built bodies. With more than 35,000 known species out of estimated possibility for more than 100,000 in total total, they constitute the largest Lepidoptera family.

Several of the species from the family have economic importance with their larva living in the soil and feeding on the bases of some crops such as lettuce and cabbage. Other species have caterpillars which have the extraordinary ability to feed on some poisonous plants, the chemicals contained in which would definitely kill other insects.