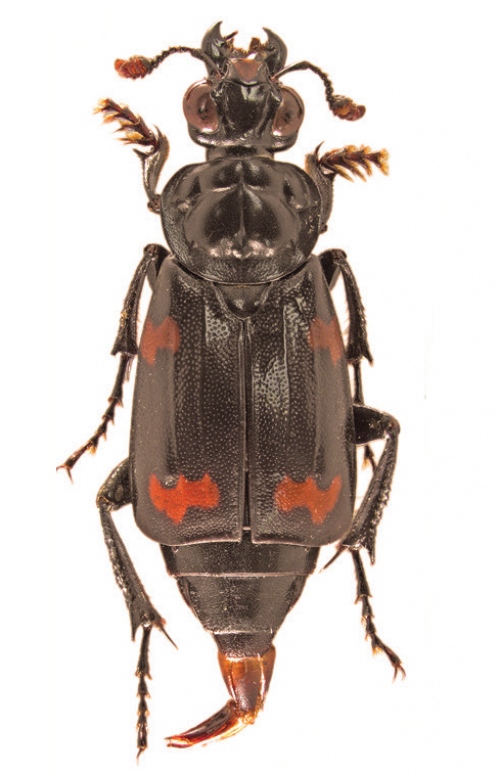 Scientists discovered a new species of burying beetle, Nicrophorus efferens. Burying beetles are well known to most naturalists because of their large size, striking black and red colors, and interesting reproductive behaviors – they bury small vertebrate carcasses which their offspring eat in an underground crypt, guarded by both parents. The study was published in the open access journal Zookeys.

This new species, known from only 6 specimens collected in 1968, sat unrecognized as an undescribed species for over 40 years. “It was a bit of good luck that led to our realization these specimens belonged to an undescribed species. My student, Tonya, was visiting Hawaii for some R&R and decided to look over the burying beetles held by the Bishop Museum. Her PhD research was focused on the biogeography and evolution of a subgroup of these beetles and she identified these six specimens as very interesting and possibly new. The discovery of new species in old collections is a common occurrence and one of the many reasons why museums like the Bishop play a vital role in helping us understand life on this planet.”, commented Dr. Sikes, University of Alaska Museum.

The second author, Tonya Mousseau, added, “Without my background and training in the taxonomy of beetles, particularly the burying beetles, this new species might never have been uncovered. This really reinforces the idea that classic training in taxonomy and systematics is absolutely necessary to discovering and understanding the biodiversity of earth.”

As far as the authors of this new species know, no one has seen this species alive. “It’s likely they bury small vertebrate carcasses, like their close relatives do, but if they have any different behaviors we’ll have to wait for future studies to learn of them. ”

The data underpinning the analyses reported in this paper are deposited at GBIF, the Global Biodiversity Information Facility:
http://ipt.pensoft.net/ipt/resource.do?r=type_specimen_data_for_new_species_nicrophorus_efferens