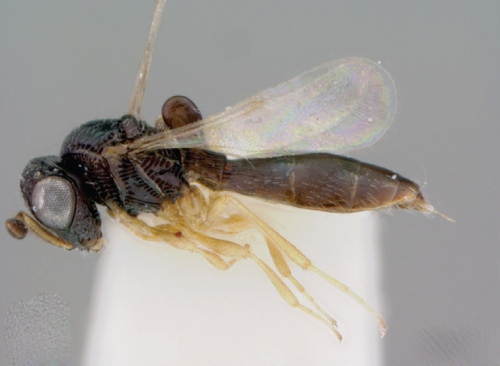 The wasp family Platygastridae is a large group of tiny, exclusively parasitoid wasps distributed worldwide. The genera Odontacolus and Cyphacolus, belonging to this family, are among the most distinctive wasps because of the peculiar hump-like formation on the rear part of their bodies. Despite their intriguing body shape, the generic status of these two groups has remained unclear. A new extensive study published in the open access Zookeys presents a morphological phylogenetic analysis including an astonishing 32 new species.

The peculiar shape of the so called horn structure on the back of these wasps is believed to be linked to the ovipositor system of the species. Only between 1 to maximum 2.5 mm long, these tiny wasps are actually vicious parasitoids, using their ovipositor to inject eggs into spider eggs, thus ensuring the development of their offspring at the expense of other species.

Previously considered to be relatively rare based on material available in collections, recent intensive collecting using Malaise and yellow-pan traps has revealed that some species of Odontacolus are moderately common, leading to the description of 32 species from across Africa, Australia and Asia.

“This has been an intriguing study for several reasons; it has uncovered many new species of this group of wasps; their biology is particularly fascinating given they parasitise the eggs of spiders, and their horn like structure makes them very easy to identify.”, comments Professor Andy Austin.