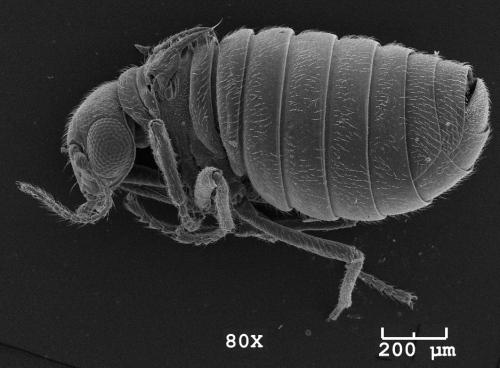 Researchers from the University of Alaska Fairbanks (Derek Sikes and Jill Stockbridge) discovered a strange new insect on Prince of Wales Island, Alaska. It belongs to an enigmatic group that might help scientists understand the evolutionary origin of the Fleas. The new species belongs to the insect order Mecoptera which includes the scorpionflies, hangingflies, and snow scorpionflies. The description has been published recently in the open access journal ZooKeys.

“We process thousands of Alaskan insects specimens into our collections at the University of Alaska Museum every year so it’s rare that we see something that throws us for a loop. I called Derek, the Curator of Insects for the museum, into the lab and asked him what kind of insect this was and he didn’t even know the order!”, said co-author Jill Stockbridge.

With a digital photo in hand they posted the image on Facebook so their entomologist friends could offer their opinions. It’s such a strange insect that, not surprisingly, most suggestions were wrong. One entomologist, Michael Ivie, of Montana State University, recognized it as the genus Caurinus of which only one species, from Washington and Oregon, was previously known.

“In addition to being the second known species of such an usual group of insects, we were excited to learn from fossil evidence that these two species belong to a group that probably dates back over 145 million years, to the Jurassic!” said the lead author Derek Sikes.

These tiny (2 mm) flea-like animals feed on a leafy liverwort that grows in coastal forests. A video in which Loren Russell, the author of the first species and who joined the authors during a May 2013 expedition in Alaska, shows how to collect this new species is online at: https://vimeo.com/68819818 and a video showing this new species hopping is online at: https://vimeo.com/68819819 .

Funding for this research was provided by the Alaska Department of Fish and Game.