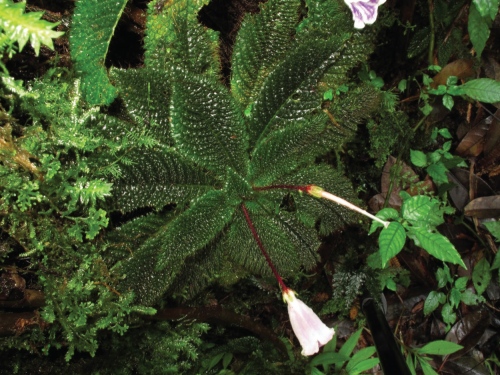 A new species of rare and beautiful plant has been described from the biodiversity rich Peninsular Malaysia. Ridleyandra chuana is endemic to the region and only known from two small montane forest populations. The conservation status of this recently described delicate flower is assessed as Endangered due to its restricted distribution. The new species was described and illustrated in the open access journal PhytoKeys.

Ridleyandra chuana is a perennial herb with a woody usually unbranched stem crowned by an asymmetrical rosette of dark green leaves covered in fine hairs. The beautiful and delicate cone-like flowers are white with dark maroon purple stripes. They rarely appear in more than two in one go usually flowering in succession. Ridleyandra chuana grows on moss-covered granite rock embedded in soil or on low moss-covered granite boulders, in extremely damp, deeply shaded conditions on steep slopes in valleys.

Although the species is only formally described now, it was in fact first encountered as early as 1932 at Fraser’s Hill, Pahang. However, it was only in 1999 when another population was discovered by L.S.L. Chua on Gunung Ulu Kali, Pahang, that sufficient material was available for its description. Since then, both these localities have been revisited and the Gunung Ulu Kali population is now the focus of conservation.

The new species is named in honour of Dr. Lillian Swee Lian Chua, botanist and conservationist, who first discovered this species on Gunung Ulu Kali while making an ecological inventory of the summit flora. Under the IUCN criteria, this species is assessed as Endangered because it is known from two localities, one of which is threatened, and only 130 known individuals.

“The population at Fraser’s Hill falls within a Totally Protected Area and consists of about 30 plants that grow in an undisturbed site away from tourist trails and is too remote to be affected by development. The other population consists of less than 100 plants at Gunung Ulu Kali, which is on private land in a hill resort that is severely threatened by road widening and associated landslips, by changes in microclimate due to edge effect as the forest becomes more and more fragmented and that is in danger of encroachment from future development. The chances of this latter population surviving is very slim. On the other hand, the rediscovery of the Fraser’s Hill population after a hundred years illustrates the resilience of species to survive if the habitat remains undisturbed.”, explains Dr. Ruth Kiew, the author of this study.