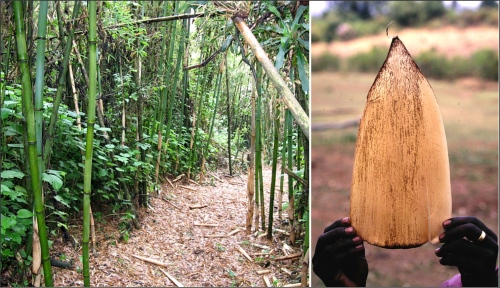 African mountain bamboos are something of a mystery, as nearly all bamboos are found in Asia or South America. Hidden away up mountains in the tropics where they provide food for gorillas, just as China’s bamboos provide food for the Giant Panda, there are apparently only 2 species, and they had not been examined in very great detail, except by the gorillas.

It had been thought that they were very closely related to the hundreds of similar bamboos in Asia, but their respective ranges are separated by thousands of miles. As flowering in bamboos is such a rare event, spreading by seed takes a very long time, and the suspicion arose that they might be old enough to represent new genera, and possibly could even be remnants of the earliest temperate bamboos, which spread to Asia on drifting tectonic plates. A new study published in the open access journal PhytoKeys, studies the diversity and evolution of African bamboo.

Having studied bamboos in the Himalayas extensively, and edited the descriptions of all the bamboos of China for the Flora of China Project of Academia Sinica and Missouri Botanical Gardens, Dr. Chris Stapleton turned his attention to the bamboos of Africa. He found that the features of the mountain bamboos were significantly different to those of Asia, and together with the large geographic separation, the differences were sufficient for the recognition of 2 new African genera, now named Bergbambos and Oldeania, after their local names in the Afrikaans and Maasai languages. The species are now Bergbambos tessellata Fig. 2, and Oldeania alpina Fig. 3.

DNA had been extracted from these bamboos and examined on several occasions, but the results of analyses were variable and could not prove a close relationship to any of the bamboos of Asia. What is clear when looking at all the DNA results together is that the African bamboos represent two separate lineages, and neither can be included in any known Asian genus.

Earlier work on the global distribution of bamboos has shown that bamboos evolved in the southern hemisphere on a landmass called Gondwanaland, parts of which spread apart to form South America, Africa and Asia when it broke up as a result of continental drift, the slow movement of tectonic plates on the earth’s surface. The incredible variety of temperate bamboos in China is thought to be a result of the early bamboos spreading out from either Africa or India when the plates collided and allowed the hitch-hiking bamboos to jump across into new territory.

The features and DNA of the African bamboos are certainly different to those of East Asia, but it is still not clear whether they are really different enough to represent ancestors of all the Asian bamboos. It will be necessary to hunt out and study mountain bamboos of Sri Lanka and Madagascar and to include them in a broader analysis to be sure. From this review, however, it looks as though African bamboos evolved about the same time as the bamboos of E Asia. The miriad temperate bamboos of China are more likely to have been a gift from India, rather than another ”Out of Africa” story, but further work is needed to be sure. What is clear is that Africa has two more endemic genera, and the bamboos are seen to be as unique as the animals that depend upon them.