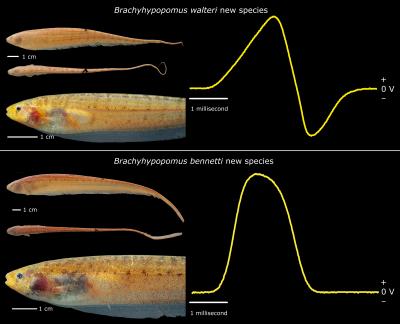 Much as human siblings can have vastly different personalities despite their similar resemblance and genetics, two closely related species of electric fish from the Amazon produce very different electric signals. These species, new to science, are described in the open access journal ZooKeys by Drs. John Sullivan of Cornell University in Ithaca, New York, Jansen Zuanon of the National Amazonian Research Institute in Manaus, Brazil and Cristina Cox Fernandes of the University of Massachusetts, Amherst.

The two new species are bluntnose knifefish, genus Brachyhypopomus, that live under rafts of unrooted grasses and water hyacinth along the margins of the Amazon River called “floating meadows.” These are weakly electric relatives of South America’s famous electric “eel” (not a true eel) that can produce strong electric discharges of hundreds of volts. By contrast, these weakly fishes produce pulses of only a few hundred millivolts from an organ under the body that extends out onto a filamentous tail. Nearby objects in the water create distortions to the electric field that are sensed by receptor cells on the fishes’ skin. In this way, they are able to “electrolocate” through their complex aquatic environment at night. Their short electric pulses, too weak to be sensed by touch, are also used to communicate the sender’s species identity and gender to other electric fishes.

“The most striking differences between these two similar species have to do with their electric organs and their electric organ discharges, or EODs.”, says lead author John Sullivan, Curatorial Affiliate at the Cornell University Museum of Vertebrates. “If it weren’t for these traits, we undoubtedly would have thought they were a single species. The one we are calling Brachyhypopomus bennetti has a huge electric organ, a short, fat tail, and produces a monophasic EOD; the other one that we’re calling Brachyhypopomus walteri has a more typical electric organ, a long thin tail, and a more typical biphasic EOD.”

It turns out the monophasic EOD of the new species Brachyhypopomus bennetti is highly unusual. Most species of this kind of knifefish produce EOD waveforms with both a positive and negative phase to them, as viewed on an oscilloscope: essentially alternating current. In this way, there is no net positive or negative current generated by the signal. “All of this fish’s relatives, including its newly described sister species, have biphasic EODs.”, says Sullivan, “For that reason we know that this trait evolved in this species’ lineage. The interesting question is why.”

One widely accepted idea is that the biphasic EOD with its reduced amount of direct current (DC) is an adaptation to hide from predatory fish, like catfishes and electric eels, that are equipped with a type of electroreceptor that are sensitive to DC. So why would one species seemingly court danger by evolving a monophasic EOD?

The only other electric fish in the Amazon with a similar monophasic EOD is the fearsome electric eel. This fish has both a weak EOD used for electrolocation and communication as well as a much more powerful EOD used to stun prey and for defense. A theory proposed by Dr. Philip Stoddard of Florida International University contends that, in much the same way that the Viceroy butterfly—a species tasty to birds—evolved wing color patterns to mimic the distasteful Monarch butterfly, the harmless B. bennetti ‘s EOD waveform evolved to mimic that of the electric eel, a species electroreceptive predatory fishes may have learned to avoid.

In this paper, the authors suggest an additional possible benefit of of B. bennetti’s monophasic EOD. Unlike biphasic species, B. bennetti’s EOD waveform is largely unaffected after their tails are partially bitten off by predators, a common type of injury in this species. They suggest that this species’ preference for floating meadow habitat near river channels may put them at particularly high risk of predation and ”tail grazing” by other fishes.

The authors show that the EOD waveforms of Brachyhypopomus species with biphasic EODs are severely altered after such injuries, whereas those of B. bennetti are not. “Any change to the EOD waveform likely impairs electroreception and communication and the monophasic EOD waveform may have been favored by natural selection in a species that suffers a lot of tail injuries.”, says Sullivan, “Selection for both EOD stability and mimicry of electric eels could be going on simultaneously…both hypotheses make predictions that should be tested.”

The research that led to the discovery of the two new Brachyhypopomus species was funded by the National Science Foundation of the United States and CNPq of Brazil.