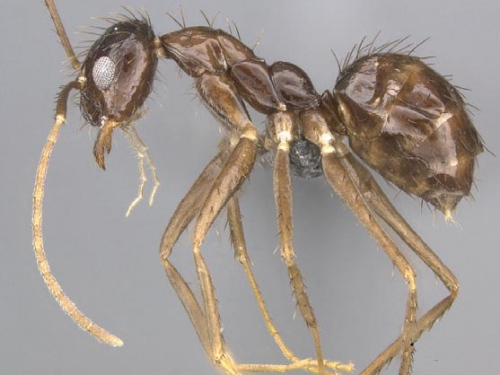 Long considered to be one of the most species-rich ant genera, latest research has stripped the ant genus Paratrechina down to a single species- Paratrechina longicornis. This particular ant is one of the most widely distributed, found in nearly every tropical and subtropical location on the planet due to accidental human transport, and is considered one of the world’s worst invasive ant species. A recent review of the genus in the open access Journal of Hymenoptera Research announces the discovery of a second species P. zanjensis, which presents a step forward into determining the native range of P. longicornis.

Native to Africa, and so far found only in miombo woodlands, the new species P. zanjensis is potentially specialized to this habitat. Miombo is the Swahili word for the Brachystegia genus of trees which are an important tree species within miombo woodlands. The specific name of this new species – zanjensis – is derived from the ancient Arabic name for the stretch of East African coast that encompasses parts of modern day Kenya, Mozambique, and Tanzania, where the species is found.

“Given the economic and ecological impacts of Paratrechina longicornis, discovering a close relative may provide us with insights into the biology of one of the world’s worst invasive ant species. For instance, now that we know another species exist within the genus, comparative studies can begin to perhaps understand the attributes that make P. longicornis such a good biological invader.” says Dr. John S. LaPolla of Towson University, USA.

Unlike its new relative, the long known P. longicornis, exhibits remarkable adaptability and is spread virtually worldwide through human activity and movement. The species is found almost in every urban center in the tropics as well as in greenhouses and other manmade structures in cool temperature climates. The remarkable ability of this ant to survive even in extremely human changed environment also makes it a well-known pest in tropical climates, commonly called crazy ant due to its erratic movements.

Due to this wide distribution and easy adaptation of P. longicornis the determination of its native range has proved a challenge to biologists. The current revision suggests that the species originates in Asia, as previously considered, however further investigation is needed to confirm this thesis.

“Given the available distribution information on P. longicornis, we conclude that P. longicornis remains most likely native to southeastern Asia, and that the discovery of a new species native to Africa makes Paratrechina yet another example of an ant genus that possesses an Afro-Asian distribution.”, explains Dr. John S. LaPolla.