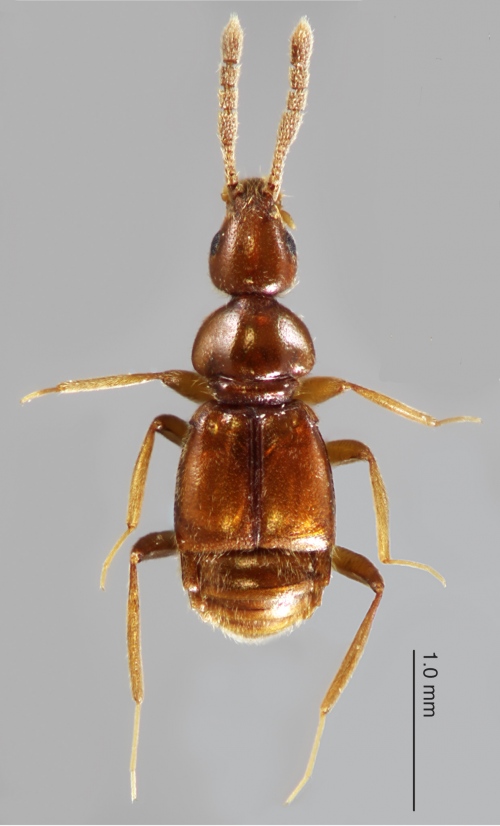 A visit to the Natural History Museum, London, yielded an unexpected surprise for Dr. Joseph Parker, a UK biologist based in New York at Columbia University and the American Museum of Natural History.

Among the 22,000 drawers of specimens that comprise the Coleoptera (beetle) collection housed in the Department of Entomology, was a new rove beetle genus collected during the 1990s in Manaus, a region of the Brazilian Amazon. The new genus is described in the open access journal ZooKeys.

The beetles, which measure only 3 mm in length, have a remarkable sexual dimorphism: the male has large eyes with over one hundred eye facets, whereas the female eyes have a paltry 12 facets. The male also has large flight wings, while the female has no wings at all. It’s likely that the male does most of the searching for mates, while the female doesn’t develop large eyes or wings and invests instead in egg production.

The beetles belong to a group of rove beetles called Pselaphinae, a “massive group of tiny beetles, amongst the commonest beetles you can find in rainforest leaf litter” according to Parker, a Pselaphinae specialist. “We know of more than 9,000 species of these beetles—that’s about as many species as there are birds. The big differences are that only about six or seven people worldwide work on these beetles, and unlike birds, many thousands more of these beetles await discovery, and unfortunately almost nothing is known about their ecology.”

Parker, who is also a developmental biologist, named the new genus “Morphogenia” after “morphogens”—a kind of signalling molecule that functions during animal development to control the size, shape and form of organs.

The beetles were found at the Biological Dynamics of Forest Fragments Project. This vast ecological experiment was set up by the Smithsonian Institution and Brazil’s National Institute for Amazonian Research (INPA) to investigate how forest fragmentation affects communities of plants and animals.

“With so few people working on groups of organisms like this, it’s hard to know what role they play in nature. The fact there’s so many species, and they’re so abundant, suggests they’re doing something important.” added Parker.