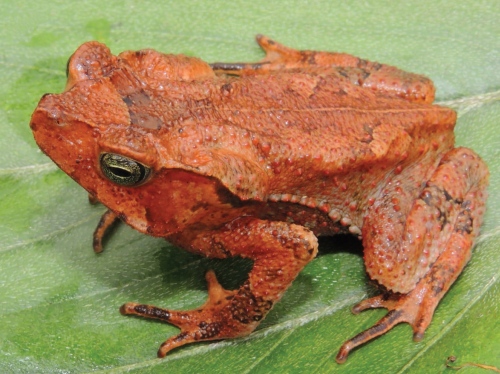 A new species of toad was discovered hiding in the leaf litter of the Peruvian Yungas. The word is used widely by the locals to describe ecoregion of montane rainforests, and translates as “warm valley” in English. The new species Rhinella yunga was baptized after its habitat preference. The study was published in the open access journal ZooKeys.

Like many other toads of the family Bufonidae the new species Rhinella yunga has a cryptic body coloration resembling the decaying leaves in the forest floor (“dead-leaf pattern”), which is in combination with expanded cranial crests and bony protrusions cleverly securing perfect camouflage. The different colors and shapes within the same species group however make the traditional morphological methods of taxonomic research hard to use to identify the real species diversity within the family. Nevertheless, Rhinela yunga is distinct from all related species in absence of a tympanic membrane, a round membranous part of hearing organ being normally visible on both sides of a toad’s head.

Among the other interesting characteristics of the true toads from the family Bufonidae are a typical warty, robust body and a pair of large poison parotoid glands on the back of their heads. The poison is excreted by the toads when stressed as a protective mechanism. Some toads, like the cane toad Rhinella marina, are more toxic than others. Male toads also possess a special organ, which after removing of testes becomes an active ovary and the toad, in effect, becomes female.