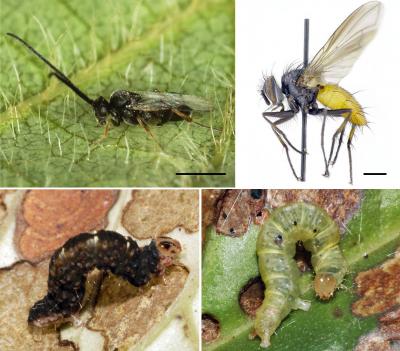 Biologists working in the Andes mountains of Ecuador have described a new plant species, a wild relative of black pepper, that is in itself a mini biodiversity hotspot. The new species, Piper kelleyi, is the sole home of an estimated 40-50 insect species, most of which are entirely dependent on this plant species for survival. This discovery is part of a larger project which focuses on the influence of plant-produced chemical compounds on biodiversity. The study was published in the open access journal PhytoKeys.

The chemical compounds produced by plants are source of plants’ unique flavors, aromas, and colors. What’s less appreciated is that these compounds often have important medicinal or toxic properties, and are the plant’s natural way to resist pesky herbivores. Black pepper and its wild relatives produce a wide diversity of chemical compounds, many of which are known to be biologically active (in fact, several compounds from the new species are currently under evaluation, and show promise as possible anti-cancer drugs). These compounds are known to deter most herbivores, but a certain group of caterpillars has been able to overcome their toxicity and, as a result, most species of the genus feed only on a single species of wild black pepper. To make matters more complex, each of these caterpillars typically has one to several predatory wasp and/or fly species that attack only that caterpillar species.

Our team of scientists has made nearly 30,000 observations of over 100 black pepper relatives over 20+ years, and the new plant species described here supports the largest number of specialized caterpillar and predator species recorded for species in the black pepper family to date. Many of these insect species were discovered as a result of our investigations and are new to science (many remain unnamed). Piper kelleyi supports an estimated 40-50 species of specialized herbivores and predators, which makes this newly described plant species, in itself, a veritable biodiversity hotspot. Are there any vertebrate species that depend on this plant? Nobody knows, but relatives of black pepper are often important food sources for vertebrates, such as bats and birds, that specialize on their fruits or feed on associated insects.

This finding has conservation implications as well. The insect species that make up this unusually large assemblage are, for the most part, entirely dependent on the new plant species and, if the plant were to disappear, all of its associated animal species would too.

Evidence suggests that the unique compounds produced by a plant species, or the unique combination of these compounds, help drive the evolution of biological diversity, not only among the herbivores that feed directly on the plants, but among higher trophic levels as well. The discovery of our new species, along with its large cohort of dependent insects, lends considerable support to the hypothesis that a suite of new species of herbivores and predators of those herbivores evolves in response to the evolution of novel plant-produced chemical compounds.