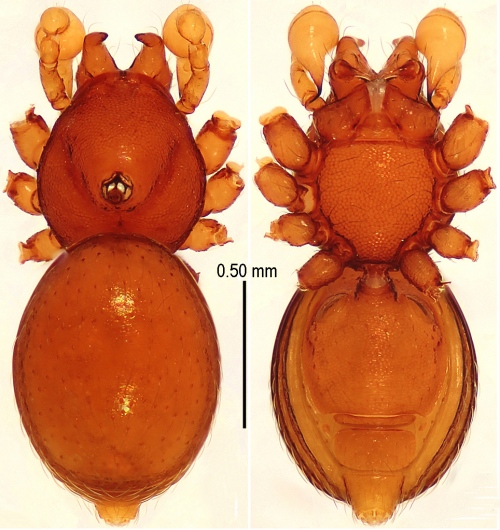 Armored spiders are medium to small species that derive their name from the complex pattern of the plates covering their abdomen strongly resembling body armor. Lurking in the darkness of caves In Southeast China, scientists discover and describe five new species of these exciting group of spiders. The study was published in the open access journal ZooKeys.

The common name armored spiders is given to the engaging family Tetrablemmidae. Distinguished by their peculiar armor-like abdominal pattern, these tropical and subtropical spiders are mainly collected from litter and soil, but like the newly described species some live in caves. Some cave species, but also some soil inhabitants, show typical adaptations of cave spiders, such as loss of eyes. The genus Tetrablemma, for example, to which two of the new species belong, is distinguished by having only 4 eyes.

Colleagues from the Chinese Academy of Sciences under the leadership of Professor Shuqiang LI have investigated more than 2000 caves in the South China Karst. Several hundred new species of cave spiders are reported by Shuqiang Li and colleagues. As a result, the total known spider species of China increased from 2300 species to 4300 species in the last 10 years.