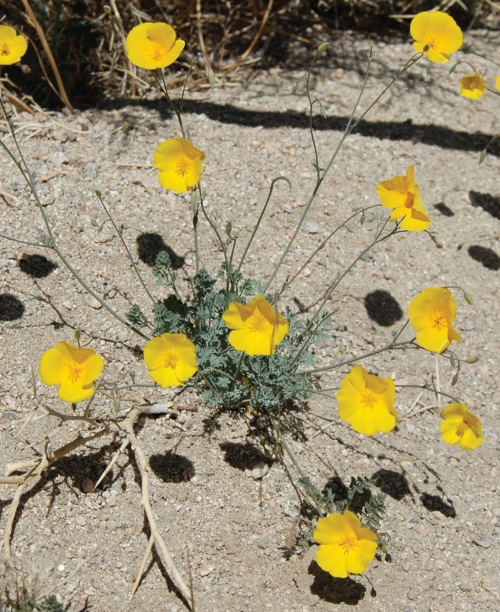 Who said that there is only sand in the deserts? Not quite desert roses, two new species of desert poppies from North America prove such statements wrong with their simple beauty. The newly described plants are found in the deserts of California and Arizona and have a vibrant yellow colored inflorescences, typical for all the desert dwellers from the Eschscholzia genus of the poppy family. The study was published in the open access journal PhytoKeys.

Most commonly known for the iconic California Poppy, the state flower of California, Eschscholzia is a genus in the poppy family Papaveraceae that previously held 12 species. The genus is native to the mainland and islands of western North America in both the United States and Mexico, but the type species, Eschscholzia californica, is commonly spread and has invaded Mediterranean regions around the world.

Shannon Still discovered the new species while studying Eschscholzia for his dissertation research at the University of California Davis. “What is interesting about these new species is that, while people have been collecting these plants for decades, they were not recognized as something different.” Still said. “They were always confused for existing species. This confusion led to my study of the group, and ultimately, recognizing something new. I imagine there are many more desert plant species that are also understudied.”

The two new desert species E. androuxii and E. papastillii are found in desert washes, flats, and slopes growing in coarse and sandy soil across California deserts and parts of Arizona. Eschscholzia androuxii has a small range, is fairly uncommon and is suggested that it be listed as a rare plant species. The wide distribution of the other species, suggests there are no conservation threats at the moment.

Still acknowledges the resources that lay the foundation for his research. “My work would have been impossible without a strong system of specimen and data sharing from herbaria around the world, and especially in California. I used the herbarium specimens to compare with collections I had made from the field, to establish important characters used to identify the species, and to examine the species’ geographic ranges. This work highlights the value that herbarium collections play in cataloging, understanding and conserving our biological diversity.”