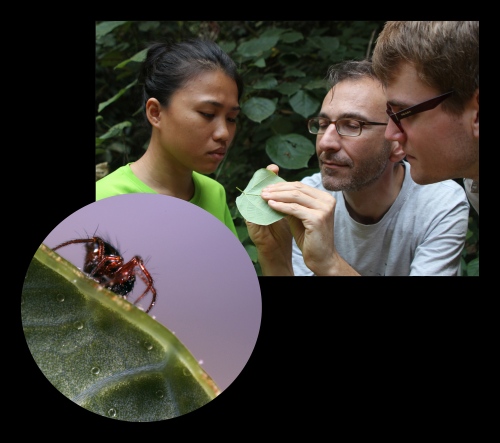 As a spin-off (pun intended) of their Tropical Biodiversity course in Malaysian Borneo, a team of biology students discover a new spider species, build a makeshift taxonomy lab, write a joint publication and send it off to a major taxonomic journal.

Discovering a new spider species was not what she had anticipated when she signed up for her field course in Tropical Biodiversity, says Elisa Panjang, a Malaysian master’s student from Universiti Malaysia Sabah. She is one of twenty students following the course, organised by Naturalis Biodiversity Center in The Netherlands, and held in the Danau Girang Field Centre in Sabah, Malaysian Borneo. The aim of the one-month course, say organisers Vincent Merckx and Menno Schilthuizen, is to teach the students about how the rich tapestry of the tropical lowland rainforest’s ecosystem is woven.

Besides charismatic species, such as the orang-utans that the students encounter every day in the forest, the tropical ecosystem consists of scores of unseen organisms, and the course focus is on these “small things that run the world”—such as the tiny orb-weaving spiders of the tongue-twistingly named family Symphytognathidae. These one-millimetre-long spiders build tiny webs that they suspend between dead leaves on the forest floor. “When we started putting our noses to the ground we saw them everywhere.” says Danish student Jennie Burmester enthusiastically. What they weren’t prepared for was that the webs turned out to be the work of an unknown species, as spider specialist Jeremy Miller, an instructor on the course, quickly confirmed.

The students then decided to make the official naming and description of the species a course project. They rigged the field centre’s microscopes with smartphones to produce images of the tiny spider’s even tinier genitals (using cooking oil from the station’s kitchen to make them more translucent), dusted the spider’s webs with puffs of corn flour (also from the kitchen) to make them stand out and described the way they were built. They also put a spider in alcohol as “holotype”, the obligatory reference specimen for the naming of any new species—which is to be stored in the collection of Universiti Malaysia Sabah. Finally, a dinner-time discussion yielded a name for this latest addition to the tree of life: Crassignatha danaugirangensis, after the field centre’s idyllic setting at the Danau Girang oxbow lake.

All data and images were then compiled into a scientific paper, which, via the station’s satellite link, was submitted to the Biodiversity Data Journal, a leading online journal for quick dissemination of new biodiversity data. Even though thousands of similarly-sized spider species still await discovery, Miller thinks the publication is an important one. “It means we provide a quick anchor point for further work on this species; the naming of a species is the only way to make sure we’re all singing from the same score.” he says.

Peter Schalk, Executive Secretary of Species 2000 / CoL, and GBIF Chair, comments: “This is a fine example of how the taxonomic world is embracing the digital era. Open data and rapid publication form the key for sharing information which in turn provides valuable input for responsible management of the world’s biosphere. One of the most important achievements of this paper is that all data associated with this species have been harvested from the article and collated with other data on GBIF and Encyclopedia of Life right on the day of publication, through a specially designed format called Darwin Core Archive. This is indeed a “real time” data publishing!”

Field station director Benoît Goossens adds: “This tiny new spider is a nice counterpoint to the large-mammal work we’re doing and having it named after the field centre is extremely cool.” The Danau Girang Field Centre is located in the Lower Kinabatangan Wildlife Sanctuary, a strip of rainforest along Sabah’s major river, squeezed in by vast oil palm plantations on either side. Despite intensive search, the students could not find the new spider in the plantations.