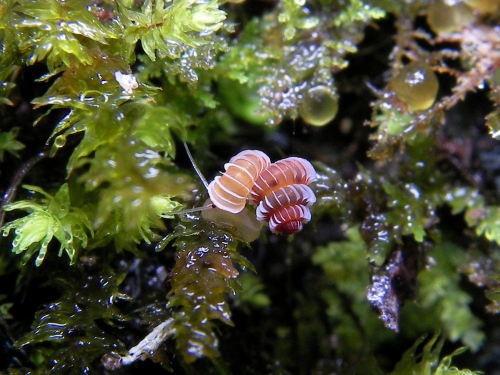 A Malaysian-Dutch team of biologists have catalogued all 31 species of the tiny, but oh so pretty snail genus Plectostoma from West-Malaysia, Sumatra, and Thailand. Ten species are new to science, but some of those are going extinct as they are being discovered.

The study was carried out by PhD student Thor-Seng Liew of Naturalis Biodiversity Center in Leiden, The Netherlands, and three colleagues. Liew, who is on study leave from Universiti Malaysia Sabah, spent four years studying the distribution, shell shape, and genetics of these minuscule snails. He is still working on the species from Borneo, where Plectostoma is exceptionally diverse, but in the new paper, published in the open access journal ZooKeys, he first gets the species from the rest of Asia out of the way.

The snails are special for several reasons, says Liew. ‘First of all, they flaunt all shell-coiling rules, by having very irregularly coiled and ornamented shells, making them look like microjewelry.’ Liew used a so-called micro-CT-scanner, which produces three-dimensional X-rays of very tiny objects, to investigate the exact shapes of the shells. This allowed him to recognise 31 species, ten of which were new to science.

Another peculiarity is that they only live on limestone hills. In Southeast Asia, such hills are usually few and far between, and the snails that manage to colonise them are completely isolated. This, in turn, has caused a lot of “endemism”: many Plectostoma species only occur on a single hill and nowhere else on earth.

But their endemism may also be their downfall, as Liew found out. Limestone hills are ‘sitting ducks’ for mining companies, and many are being quarried away for cement, taking their unique snails with them to their grave. One species, Plectostoma sciaphilum, is already extinct: its home was turned into concrete around 2003. Similar fates await at least six more species. One of these, P. tenggekensis (named and described in the new paper) occurs only on Bukit Tenggek, which the authors forecast to be completely gone by the end of 2014.

To highlight the plight of these unsung victims, the authors named several of the new species after conservationists and politicians who have fought for the preservation of Malaysia’s endangered limestone hills.