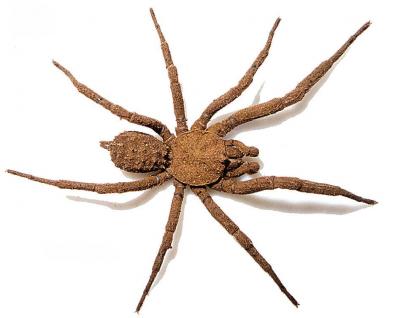 Scientists discover and describe a new species of spider from Mexico. The new species belongs to the enigmatic family Paratropididae that is distinguished by representatives who possess unique camouflaging abilities. The study was published in the open access journal ZooKeys.

Like all species form the family the new species Paratropis tuxtlensis has its entire body encrusted with soil particles. The encrusted soil on the exoskeleton could provide protection from predators or serve as camouflage to deceive their prey. The encrusted soil particles are because this species has glandular pores in the cuticle and their secretion help to stick the soil particles. These spiders are very cryptic, which coupled with lack of movement when exposed makes them quite difficult to find and collect.

The specific name of the new species Paratropis tuxtlensis refers to the type locality: Estación de Biología Tropical “Los Tuxtlas”, Veracruz, Mexico. The species is known only from the region around the type locality in the Volcán San Martin Biosphere Reserve.

These species typically don’t make burrows but rely on their camouflage to hide under rocks and in the soil. “The specimens were collected in tropical rain-forest, under boulders on the ground. They remained motionless when they were exposed by removing the rock that provided shelter, possibly as a defense mechanism because the soil particles encrusted on the body cuticle serves as camouflage with the moist ground.” explains the authors of the study, Dr. Alejandro Valdez-Mondragón, M. Sc. Jorge I. Mendoza and Dr. Oscar F. Francke from the Universidad Nacional Autónoma de México (UNAM), Mexico City.

Valdez-Mondragón A, Mendoza JI, Francke OF (2014) First record of the mygalomorph spider family Paratropididae (Arachnida, Araneae) in North America with the description of a new species of Paratropis Simon from Mexico, and with new ultramorphological data for the family. ZooKeys 416: 1. doi: 10.3897/zookeys.416.7253