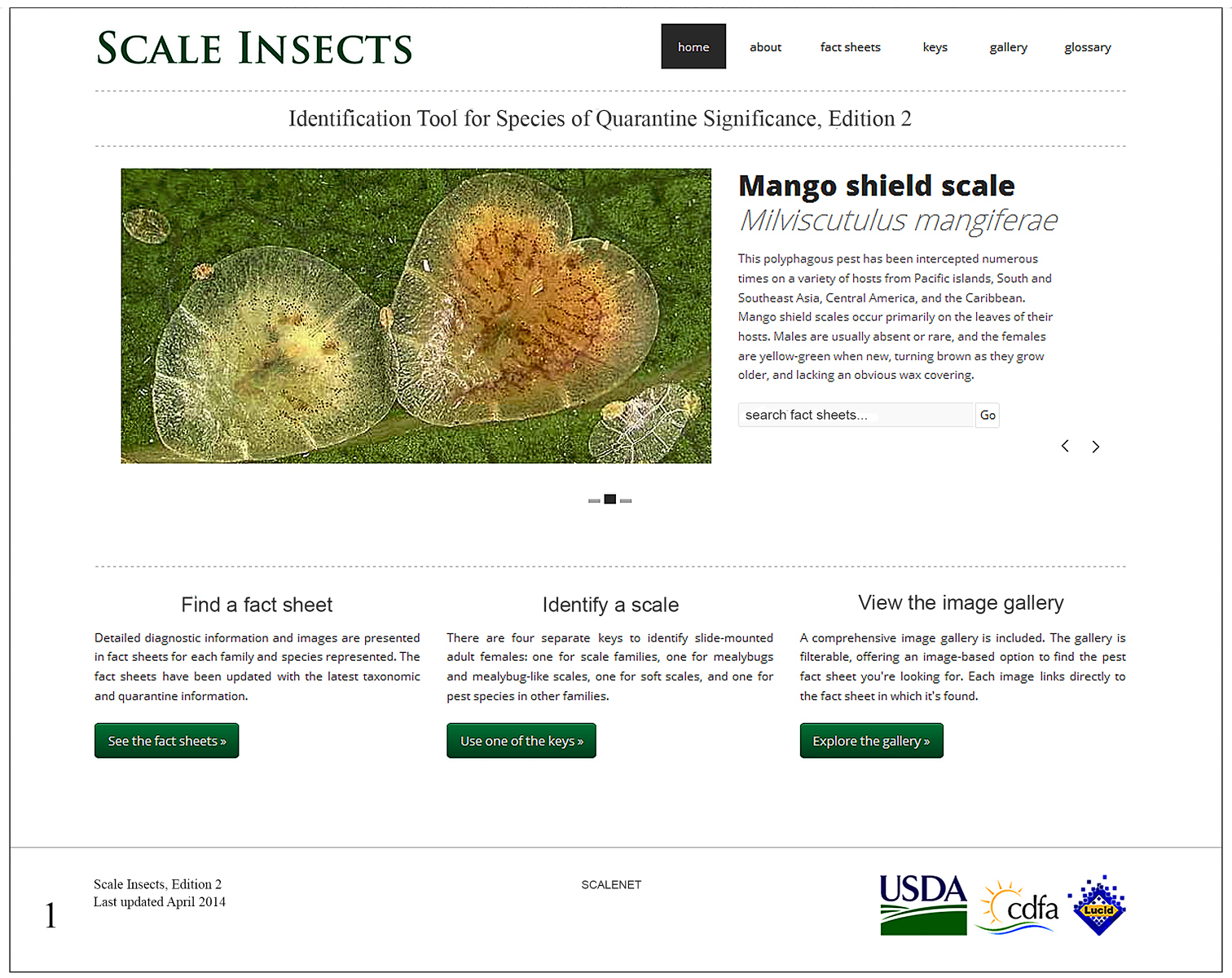 Scales are small insects that feed by sucking plant juices. They can attack nearly any plant and cause serious damage to many agricultural and ornamental plants. While native scales have natural enemies that generally keep their populations in check, invasive species often do not, and for this reason many commercially important scale pests in the United States are species that were accidentally introduced.

The new website is a comprehensive resource to assist federal and state identifiers to make authoritative identifications of intercepted scale insects. This resource includes, for each species, information on diagnostic characters, distribution, hosts, and important references with line drawings, photos of slide-mounted specimens and of specimens in the field. It also has identification keys, which were built in Lucid, a powerful expert system specifically designed for making identifications of organisms. Information on each species is maintained through links to ScaleNet, a rich relational database on scales that is updated regularly. Details about this tool have been published in the open access journal ZooKeys.

A number of other online tools, including Mobile apps, have been developed by various groups of scientists in cooperation with the USDA Animal and Plant Health Inspection Service (APHIS), Identification Technology Program (ITP), to help identify invasive species. These tools are available at no cost via the ID Tools website.

‘Protecting the borders of large countries such as the United States from invasive scales often requires a very broad knowledge of the taxonomy a group, and detailed knowledge of the literature and collections from the last 250+ years ‘, said Dr. Douglass Miller, the senior author of the paper and a retired scale insect systematist. ‘Currently only a few specialists in the world can identify scale insects based on morphology, and of these, many are retired or approaching retirement. We hope that our tool will facilitate scale insect pest identifications at the borders and will inspire taxonomists to build similar tools for their groups.’

Scale Insects, Edition 2 was made possible, in part, by a cooperative agreement from the United States Department of Agriculture (USDA) Animal and Plant Health Inspection Service’s (APHIS) Identification Technology Program (ITP). An agreement through the USDA Center for Plant Health Science and Technology (CPHST) and another infusion of funds from the USDA Invasive Species Liaison and Coordinator funded an earlier version of this tool.