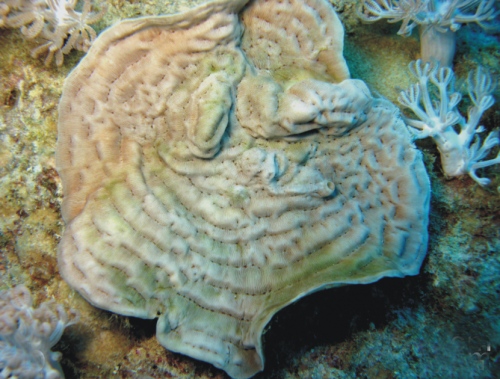 The hard corals primarily responsible for the construction of coral reefs around the world have attracted the attention of taxonomists for hundreds of years. Despite the important role such corals play in building what are arguably the world’s most diverse ecosystems, coral reefs in some parts of the world still hold surprises for modern scientists.

An international team of scientists has recently described a new hard coral species, Pachyseris inattesa, from the Saudi Arabian Red Sea. The study, led by the University of Milano-Biccocain collaboration with the King Abdullah University of Science and Technology (KAUST), highlights the opportunities for scientific discovery in a region that has historically been difficult to access.

Corals in the genus Pachyseris are reef dwellers often referred to as “elephant skin corals” or “corduroy corals” due to their wrinkled appearance. Tullia I Terraneo, the lead author of the paper, explains that the name for the new species was chosen because of the reaction she and Francesca Benzoni, the co-author who collected the species, had when examining a specimen closely. “We were looking at the SEM [scanning electron microscope] images, and realized that we had something completely unexpected.” The word ‘inattesa’ translates from Italian as ‘unforeseen’.

The coral indeed has a superficial resemblance with some common and widespread coral species of the genus Leptoseris and this led others in the past to misidentify it. “After detailed micromorphological and molecular analyses, we can confirm that this is a unique and novel lineage,” Terraneo says. The new species was recorded from different reef habitats along the coast of Saudi Arabia, between 10m-35m depth and to date its distribution seems to be limited to the Red Sea region.

The finding is the latest outcome from the “Biodiversity in the Saudi Arabian Red Sea” project organized by Michael Berumen, co-author of the study and PI of the Reef Ecology Lab at KAUST. This project was initiated in 2012 and has brought numerous scientists and taxonomic experts to the Red Sea from around world, with the overall aim to increase our understanding of the biological diversity present in Saudi Arabian coral reefs. Although the Red Sea played a pivotal role in the early history of scientific works on coral reefs, the region has been understudied in more recent times.

The discovery of Pachyseris inattesa highlights that our knowledge regarding the Red Sea is still far from complete, and that our understanding of hard coral diversity globally is likewise not perfect.

“As far as we can tell, this species is endemic to the Red Sea,” Terraneo said. “Although our current sampling has only identified it in Saudi Arabia, I suspect that further research in other Red Sea countries would reveal a broader range.”

In any case, continued discovery of new species in the Red Sea has been steadily increasing the known endemism of the region. “Findings such as those presented in this paper continue to highlight how special the Red Sea is and provide even more reasons to make sure that conservation efforts in the region preserve these natural treasures, including those that we have yet to discover,” said Berumen.