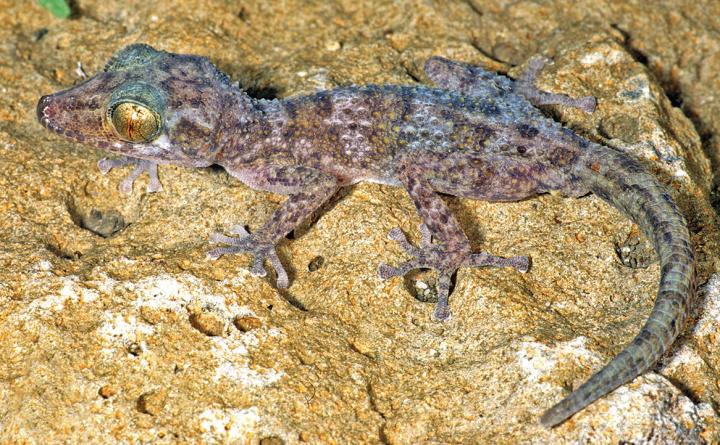 Hidden away in the tropical darkness of nocturnal Madagascar, scientists have discovered a new species of gecko which has been described in the open access journal Zoosystematics and Evolution.

A master of disguise, the new species Paroedura hordiesi has camouflage pattern to blend with its natural habitat, while climbing on rocks and the ruins of an old fort, where it was spotted by scientists.

Home of the new gecko, the karstic limestone massifs in the region of northern Madagascar are believed to still harbour further undescribed reptile species, some of which might be microendemic and threatened by substantial habitat destruction.

The new species P. hordiesi is also proposed to be classified as “Critically Endangered” on the IUCN Red List on the basis that it is known from a single location, and there is continuing decline in the extent and quality of its habitat.

The far north of Madagascar comprises a mosaic of heterogeneous landscapes ranging from rainforests on volcanic basement to deciduous dry forests in karstic massifs and littoral habitats on sandy ground. The geological and climatic diversity of this area is reflected by a high species diversity and a high degree of microendemism.

Several taxa including dwarf frogs (Stumpffia), dwarf chameleons (Brookesia), burrowing skinks (Paracontias), leaf-tail geckos (Uroplatus), and the nocturnal geckos of the genus Paroedura have undergone remarkable diversification in northern Madagascar due to the great diversity of habitats, which are separated from each other and thus in part constitute “habitat islands”.

“The new Paroedura species from Montagne des Français described in our paper is just one new contribution to the taxonomic inventory of this massif, which is believed to hold yet undiscovered diversity. This discovery also highlights the threats affecting this microendemic species and other biota in the region.” explains the lead author of the study Dr. Frank Glaw from the Bavarian State Collection of Zoology (ZSM).