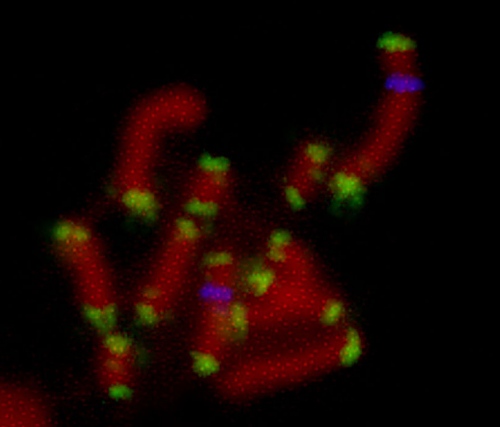 Karyotype is usually a stable feature of each species since chromosomal changes, if they occur, may contribute to the formation of barriers between populations causing the establishment of reproductive isolation and speciation as possible consequences. Indeed, mating between individuals with different karyotypes frequently produces hybrids with a reduced fertility (or sterile) due to mis-segregation of chromosomes during meiosis.

Despite the occurrence of this general rule, it seems that some animal species failed their examination in genetics and adopt different rules. Recent data published in the international journal Comparative Cytogenetics by Mauro Mandrioli, Federica Zanasi and Gian Carlo Manicardi of the University of Modena and Reggio Emilia (Italy) clearly showed that populations of the green peach aphid Myzus persicae (one of the most dangerous pest crop insects in the world) may have unusual karyotypes due to chromosomal fragmentations and/or rearrangements also within the same individual.

As the authors also observed in previous works, some aphids showed different chromosome numbers also comparing cells belonging to a same individual “forgetting” that chromosome instability within individuals should be typical of malignant cells and not of healthy insects showing a high reproductive rate. This aphid species seems to be therefore the sum of populations possessing different karyotypes that in turn can give diverse genetic/ecological/evolutionary responses in relation to imposed selective environmental forces.

The evolutionary history of M. persicae is marked with speciation events and the tobacco specialist subspecies M. persicae nicotianae, known as the tobacco aphid, is an example. It is therefore intriguing that this species preserved its morphological identity through time and across a wide geographical scale despite the presence of several populations with unusual karyotypes.