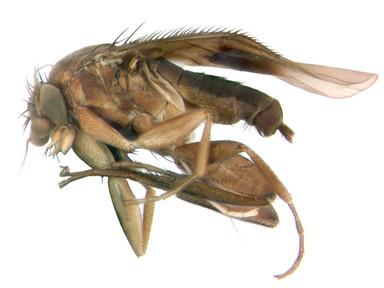 Scientists from the Natural History Museum of Los Angeles describe a new distinctive fly species of the highly diverse genus Megaselia. The study published in the Biodiversity Data Journal proposes an innovative method for streamlining Megaselia species descriptions to save hours of literature reviews and comparisons.

The new species, M. shadeae, is easily distinguished by a large, central, pigmented and bubble-like wing spot. The description is part of the the Zurquí All Diptera Biodiversity Inventory (ZADBI) project, and represents the first of an incredible number of new phorid fly species to be described from this one Costa Rican cloud forest site.

The genus Megaselia is extremely rich in species and has been characterized as an “open-ended taxon” due to its diversity and the complexity in describing new species. This single genus contains about half of the species of the Phoridae family, a majority of which are hitherto undescribed.

“In our work on the ZADBI Project and beyond, we have spent countless hours sorting through tens of thousands of worldwide Megaselia specimens.”explains Emily A. Hartop about the difficulties describing Megaselia species. “Recognized morphotypes are keyed and compared to published Megaselia descriptions in the world literature. The process can be extremely time consuming and often involves reading dozens of descriptions for each specimen you are attempting to key.”

Scanning descriptions day in and day out, dealing with so many specimens and species of Megaselia, the authors came to rely upon certain characters (and essentially disregard others) for their identifications. If a specimen matched (or came close to) the key characters of a description, actual specimens were consulted for a definitive diagnosis.

It was realized that a streamlined and standardized character set for this group that easily pared down potential matches and heavily utilized visual aides for diagnosis (rather than highly variable verbose descriptions) would facilitate not only identification of known species, but description of new ones as well. The method is described in more detail in the study titled “The tip of the iceberg: a distinctive new spotted-wing Megaselia species (Diptera: Phoridae) from a tropical cloud forest survey and a new, streamlined method forMegaselia descriptions”.
“It is our hope that the streamlined presentation of species data presented here will help stimulate rapid and abundant descriptions of unknown fauna as well as facilitating the identification of unknowns.”summarizes Hartop.

Zurquí All Diptera Biodiversity Inventory (ZADBI) is an ambitious, multi-faceted study focused on generating a thorough inventory of the dipteran fauna of a specific cloud forest site using varied and complementary collection methods. The project is revealing a goldmine of new species, not least within this gargantuan genus of phorid flies. The distinctiveness and ease of identification of the species herein described, but lack of previous recognition, hints at the tremendous amount of taxonomic work needed for this group.