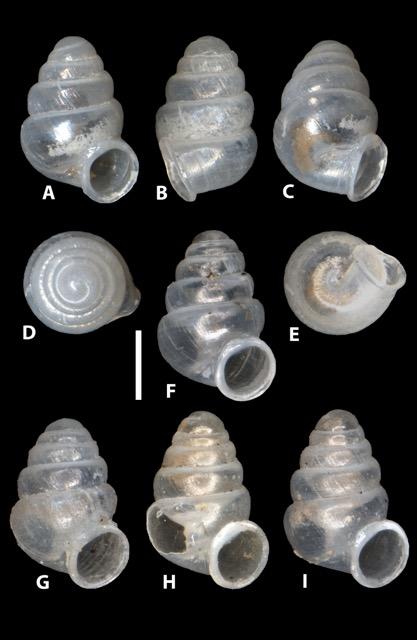 The cave-dwelling snails, known as Thorn Snails, are less than 2mm big and are amongst the smallest terrestrial snails known, some barely reaching 1 mm in shell size. Their evolution dates back to the Cenozoic Era, ca. 65 million years ago. These transparent, unpigmented snails belong to the genus Zospeum, whose species are all cave dwellers.

The two new species, Zospeum vasconicum and Zospeum zaldivarae, comprise a genus containing about 20 species known to inhabit caves from Northern Spain to the Dinaric Alps of former Yugoslavia. The team’s discovery of the first subterranean Thorn Snail colony in Northern Spain was initially published in the journal MalaCo. Now, the classification of these enigmatic snails from the moist, muddy cave walls underneath the Basque-Cantabrian Mountians has been published in the open access journal ZooKeys.

Previous research dates from the latter half of the 19th and 20th Centuries and was conducted on shells alone. Live individuals are very rare. Molecular studies published by the first three authors have contributed much to the knowledge of the evolution of these tiny troglobitic snails. The new species belong to the first recorded live Zospeum populations from Spain. Two years ago, Alexander Weigand described the cave-dwelling, Thorn Snail relative of these Spanish species from a plunging 950m-deep chasm in the Velebit Mts. of Croatia.

These rare denizens of the dark can only be found alive using a magnifying glass. Knowledge of their subterranean ecology as well as a “gut feeling” of where they might be hanging out is necessary. The two new species were described using shell criteria in conjunction with molecular investigations.

BiK-F Biodiversity and Climate Research Center of the research- funding program, ‘LOEWE – Landes-Offensive zur Entwicklung Wissenschaftlich-ökonomischer Exzellenz’ of the Ministry of Higher Education, Research, and the Arts for the State of Hessen.

Ministry of Higher Education, Science and Technology of the Slovene Republic (P1-0236 Biodiversity and Gradients)

The Basque Government through the Research group on “Systematics, Biogeography and Population Dynamics” (GIC10/76; IT575/13).