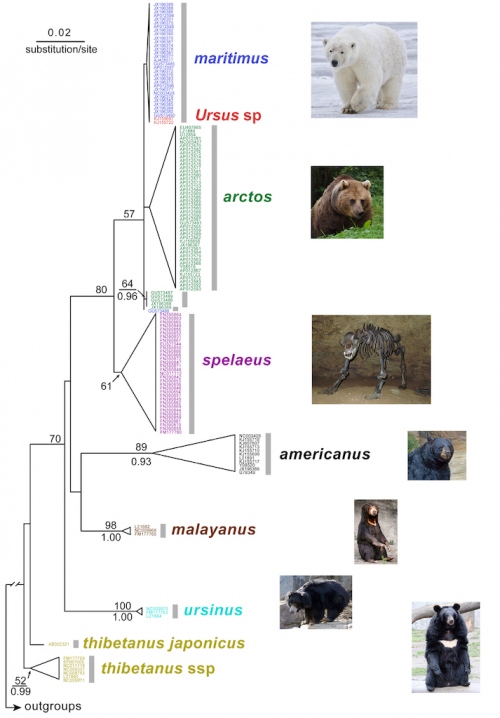 A Venezuelan evolutionary biologist and a US zoologist state that they have refuted, through mitochondrial DNA sequencing, a recent claim, also based on such sequencing, that unknown type of bear must exist. in the Himalayas and that it may be, at least in part, the source of yeti legends. Their study was published in the open access journal ZooKeys.

Last year, B. Sykes and co-authors, in the course of mitochondrial DNA sequencing identification of hair samples that had been attributed to “anomalous primates” (yetis, bigfoots, and others), claimed to have found that two samples said to have come from the Himalayas had a 100% match with DNA recovered from a fossil Polar Bear from over 40,000 years ago. On this basis, they concluded that a currently unknown type of bear must inhabit that portion of Asia.

Later, however, it was shown by C.J. Edwards and R. Barnett that the sample that matchedSykes and co-authors‘ Himalayan ones, was in fact, from a present-day Polar Bear from Alaska, not from a fossil, and they hypothesized that the genetic material in the samples attributed to an unknown type of bear might have been misleading because of degradation.

Sykes and co-authors, however, have continued to maintain that their Himalayan samples must be from an unknown type of bear — a claim that has received a good deal of attention from the media.

However, further analysis by Eliécer E. Gutiérrez, currently a postdoctoral fellow at theSmithsonian Institution, and Ronald H. Pine, affiliated with the Biodiversity Institute & Natural History Museum at the University of Kansas, have concluded that the relevant genetic variation in Brown Bears makes it impossible to assign, with certainty, Sykes and co-authors’ samples to either that species or the Polar Bear.

In fact, because of genetic overlap, the samples could have come from either one. Because Brown Bears occur in the Himalayas, Gutiérrez and Pine state that therefore there is no reason to believe that the samples in question came from anything other than ordinary Himalayan Brown Bears.

As part of their study, Gutiérrez and Pine examined how the gene sequences analyzed might show the ways in which six present-day species of bears, including the Polar Bear and the Brown Bear; and the extinct Eurasian Cave Bear; might be related.

The results were partly in agreement with past studies but were also showing some new insights. The data set resulting from studying this part of the bears’ genomes seems to be insufficient to make any definitive decisions as to what are the existing relationships on the basis of it alone. In combination with the results of other studies, however, it may very well prove quite useful in making such decisions.

Interestingly, it was found that one sequence from an Asian Black Bear from Japan indicated that it was not closely related to the mainland members of that species. This unexpected large evolutionary distance between these two geographic groups of the Asian Black Bear probably deserves further study.

“In fact, a study looking at the genetic and morphological variability of Asian Black Bear populations throughout the geographic distribution of the species is yet to be conducted, and it would surely yield exciting results,” Gutiérrez said.