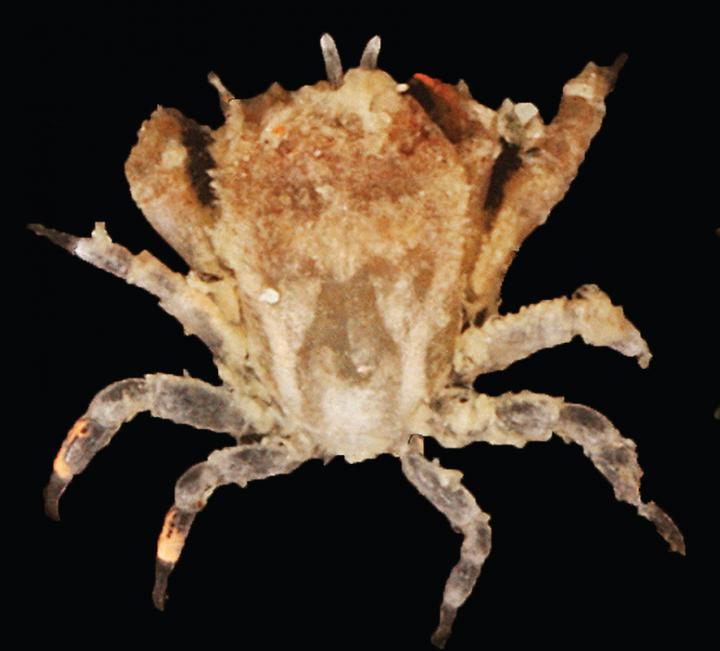 Fieldwork in Indonesia and Malaysia by researcher Sancia van der Meij from Naturalis Biodiversity Center in the Netherlands lead to the discovery of a new coral-dwelling gall crab. The new gall crab, named Lithoscaptus semperi, was discovered inhabiting free-living corals of the speciesTrachyphyllia geoffroyi on sandy bottoms near coral reefs. The study was published in the 500th issue of the open access journal ZooKeys.

Gall crabs are very small – less than 1 cm in size – and live in a ‘dwelling’ in stony corals. Gall crab larvae settle on a coral as a larvae and the coral then grows around the crab, creating a ‘dwelling’. These dwellings are named galls, which explains the common name of the crabs.

Female gall crabs are about two times larger than males. Because of their larger size and the large number of eggs they can carry, they cannot leave their galls and become ‘imprisoned’. Males (presumably) can leave their dwellings and move around freely.

‘When I started working on gall crabs, I had a hard time finding them because of their small size’, says Sancia van der Meij, the author of the study. ‘But once I knew how to recognise their dwellings, I realised they are actually very common on coral reefs.’

Host specificity is observed in gall crabs, which means that a gall crab species inhabits one or several closely related coral species. The new gall crab species discovered in this study is so far only known to inhabit Trachyphyllia corals.

The holotype (the name-bearing specimen of this new species) was collected during fieldwork off Kudat in Malaysian Borneo, funded by WWF-Malaysia. ‘This study highlights the need to protect our coral reefs’, says Robecca Jumin, Head of Marine, WWF-Malaysia. ‘New species are still being discovered as the proposed Tun Mustapha Park (TMP) is still largely unexplored’. Once gazetted, the TMP will be the largest marine protected area in Malaysia, encompassing almost a million hectares of mangrove, seagrass and coral reefs.