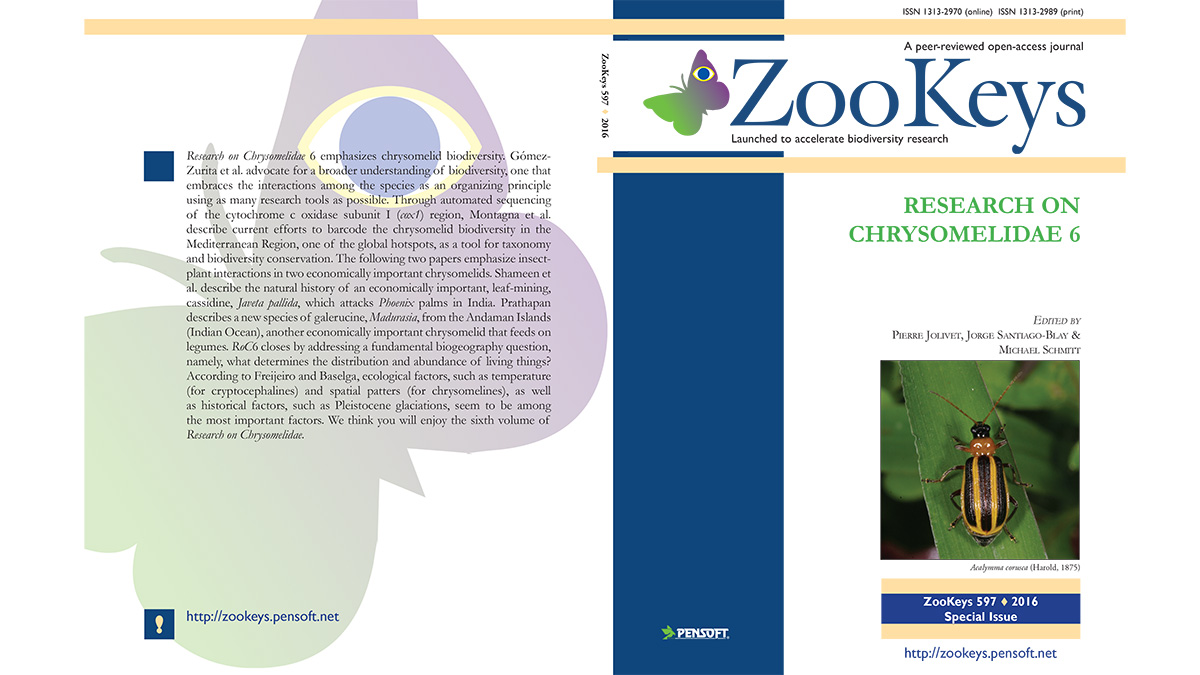 The new and sixth volume of Research on Chrysomelidae consists of five research articles devoted to the latest findings about the amazing family of over 37,000 leaf beetle species from more than 2,500 genera. Among the studies, conducted by authors from all around the world, there is a new species of potentially dangerous legume-feeding pest, as well as new information regarding the life cycle,ecological interactions, species richness factors and taxonomy of some leaf beetles.

The latest volume devoted to one of the most intriguing beetle families also marks a turning point for the entomologists sharing special fondness for the leaf beetles. While the “spiritus rector” of the Chrysomelidae research community, Prof Pierre Jolivet resigned from his position last year, now Dr Jorge Santiago-Blay is also stepping down from the editorial board.

The third of the original trio, Prof Michael Schmitt, Ernst-Moritz-Arndt-Universität, takes the opportunity to look back to the beginning of the community and pay tribute to his long-year colleagues in his Editorial. He also confirms that the series, by now traditionally published in the open access journal ZooKeys, is far from over.

“I thank Jorge Santiago-Blay from the bottom of my heart for his tireless engagement in fostering leaf beetle research and his friendship, and wish him All the Best for whatever he may entertain in the future,” read his words.

In his short publication accompanying the five-piece issue, Prof Michael Schmitt recalls the very beginning of his team’s existence, started in 2001. He does not omit to note the numerous obstacles surrounding the first issues. At a point, having completed the enormous book “The green book – New Developments in the Biology of the Chrysomelidae”, comprising 62 chapters by 111 authors, as well as the first two volumes of Research on Chrysomelidae, they were made to drop the series due to unsatisfying selling numbers.

However, everything changed after the conversation Prof Pierre Jolivet and Prof Lyubomir Penev, Pensoft Publishers, had at the 9th European Congress of Entomology, held in Hungary in 2010. There they agreed to publish the next Research on Chrysomelidae volume as a special issue in ZooKeys, one of Pensoft’s journals.

Shortly after, the collaboration turned out so successful that it is now resulting in a fourth consecutive special issue. In the meantime, last December, the 30th anniversary of Symposia on Chysomelidae was celebrated in another leaf beetle-themed ZooKeys issue. Moreover, the next issue is already planned. It will cover the proceedings of the 9th International Symposium on Chrysomelidae and will be edited by Prof Michael Schmitt and Dr Caroline Chaboo, University of Nebraska State Museum, USA.

“The present volume is the fourth, but certainly not the last, published by Pensoft. Although the pullout of Pierre Jolivet and Jorge Santiago-Blay marks a crucial cut in the history of Research on Chrysomelidae, I understand the reasons of their decision to step down,” concludes Prof Michael Schmitt. “I hope and wish that the series will prosper and remain accepted as a forum of leaf beetle research by the community of Chrysomelidae enthusiasts all over the world.”

Research on Chrysomelidae 6 Special Issue is available to read and order from here.