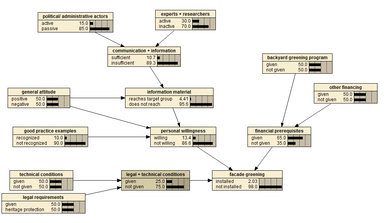 Predictions for temperature rise and the particular sensitivity of urban ecosystems to heat stress pose a pressure to find the best solution for mitigation and adaptation to climate change. Could green façades be a sustainable and easy to implement strategy to keep our cities cool? A new study in the open access journal One Ecosystem uses the method of Bayesian networks to assess applicability of this nature-based solution, within the context of Berlin’s urban environment.

Urban heat is a recognised challenge for mid-latitude cities possibly aggravated by global climate change. Among the strategies to adapt the urban fabric, façade greening has been identified as an important measure to adjust the building stock and new buildings to adverse climatic impacts. Yet, little is known on factors that influence implementation probabilities for this adaptation measure.

Façade greening could be rather suitable way to establish vegetation in cities despite the development pressure. Not used for other purposes, unlike most of the horizontal green and open spaces in cities, façade greening needs very little space on the ground eliminating pressure and user competition.

In the past years, most German cities have developed climate change adaptation strategies which particularly focus on nature-based measures for urban planning to tackle the impacts of urban heat. In 15 of the 24 German adaptation strategies façade greening is mentioned as a measure to improve microclimatic conditions. But what is the likelihood of implementing and what is the attitude towards this measure?

Analysing attitudes and possibilities in the context of Berlin, a group of scientists found out that experts in Berlin estimate the likelihood of an implementation of façade greening under current conditions at 2% only. A different scenario including financial incentives from a backyard greening program, however, has shown to raise the chances to 14 %. Nonetheless, the factor of “willingness” of involved actors and the right combination of supportive and legislative factors appeared as a crucial pre-condition for the implementation of this measure.

“Our analysis allowed for ranking the influence of each of the factors on the outcome the research and we were surprised to see that in this case the “attitude” of determinant actors is of outmost importance, while financial prerequisites, legal and technical conditions also have an influence on the decision to install green façades but remain lower on the list.” comments the lead author of the study Nora Sprondel, Technische Universität Berlin, Germany.