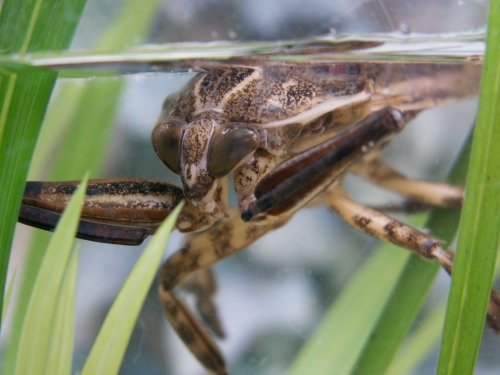 A new study provides detailed information on karyotype and reproductive system of the species, the distribution, including rare video of their dexterous and vicious hunting practices

The giant water bug Lethocerus patruelis is the largest European true bug and the largest European water insect. The adult bugs reach an impressive 8 cm in length, and the largest representatives of the same family are even bigger – up to almost 12 cm. A new article published in the open access journal Zookeys provides detailed information on karyotype and the chromosome behavior, the male reproductive system of the species, as well as interesting insights into the life habits and the distribution of the species on the Balkans.

Lethocerus patruelis is a member of the family Belostomatidae also known as electric light bugs or toe biters. These bugs are fierce predators which stalk, capture and feed on aquatic crustaceans, fish and amphibians. When they strike, they inject strong digestive saliva, sucking out the liquefied remains to feed. This powerful hunting tool gave the family its common name, referring to the extremely painful bite from the Belostomatidae members. Their bite is considered one of the most painful that can be ever inflicted by any insect but it is of no medical significance.

During their study of the giant water bug N. Simov and M. Langourov from the study team had the unique chance to witness and record on video the vicious predatory practices of the species. In the recorded material, a larva uses the stems of a water plant to stalk and ambush its unsuspicious pray. The giant water bug larva can be seen storming from its cover and catching and injecting saliva into a small fish.

During the last ten years, many new findings of L. patruelis were made by the team in Southern Bulgaria, providing evidence that the giant water bug is expanding its territory northwards. Such a wide and abundant distribution of the species in these regions would be a further sign of the recent changes of European bug fauna caused by climate change and an important clue for the effects of global warming.