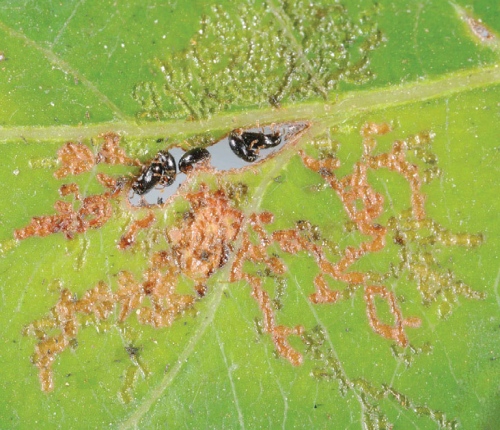 Many animals construct homes or shelters to escape from biological and physical hostilities. Birds, spiders, termites, ants, bees and wasps are the most famous animal architects. As shelter construction requires considerable investment of resources and time, builders tend to minimize the cost of building while maximizing the benefits.

Builders are rather uncommon among adult leaf beetles though young ones of certain species use own feces to construct a defensive shield. Two closely related, hitherto unknown species of tiny southern Indian leaf beetles, only slightly larger than the size of a pin-head, and their clever way of using and modifying low cost shelters, is described in the open access journal ZooKeys. These beetles make use of holes pre-formed by larger leaf feeding beetles on the leaves of their host trees thus reducing cost of the shelter just like some birds that nest in existing cavities produced by primary cavity nesters, such as woodpeckers.

The beetles also use artificially made holes to construct hideouts called “leaf hole shelters”. As the shape and size of the hole were not exactly in tune with the requirements of the beetle, they resized the hole by partitioning with a wall constructed with own fecal pellets. Use of feces by adult leaf beetles for construction of shelters is being described for the first time, with these two new southern Indian species namely Orthaltica eugenia and Orthaltica terminalia. The beetles are named after their host trees, common in jungles of the Western Ghats Mountains, which is a globally recognized hot spot of biodiversity.