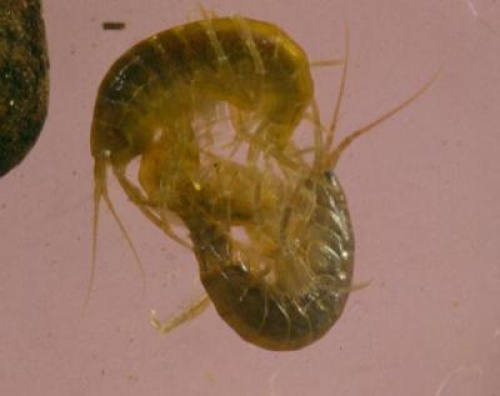 A shrimp from America has been invading Europe’s rivers and lakes for several decades, but something seems to be preventing this colonist from becoming numerous and problematic, like so many other invaders – such as the Californian grey squirrel and American crayfish. Could the resident European shrimps have something to do with this?

Jaimie Dick and his colleagues mapped the occurrence of the interloper and found it only existed where native shrimps were absent or rare. When native shrimps were common, the American shrimp simply could not establish and it disappeared. The results have been published in the open access journal NeoBiota.

”We came up with the idea that the native shrimps might be eating the exotic species to the point of local extinction, and hence its patchy occurrence.” said Prof. Dick. ”So we staged fights between two of our native shrimps, Gammarus pulex and Gammarus duebeni, and they both proved very effective at killing and eating the invader Crangonyx pseudogracilis. Remarkably, one of the native shrimps. G. pulex, which almost never allows the invader to establish, was the better of the two predators in our experiments. The other native shrimp, G. duebeni, sometimes co-exists with the invader because it is a less effective predator. Thus, our laboratory experiments helped us understand a Europe-wide pattern of failed invasion.”

Invasion ecologists use the term ”biotic resistance” to describe how native species might fight back and drive invaders extinct. But unravelling how this occurs is not an easy task. By comparing the numbers of invaders killed over a range of their densities, the research showed that the native shrimps can kill most invaders to the point their populations crash, and hence the invasion is halted.

”Understanding how native species resist exotic species could help us prevent further invasions that damage crops, biodiversity and cost £Billions each year. If we act to help native species populations, we can reduce the menace of invaders. Finally we can begin to turn the tide on unwelcome and out-of-control colonists.” explained Prof. Dick.

The authors are conducting more work in Ireland, England, Canada and South Africa to understand how native and invasive species interact and thus how to combat a very real environmental and economic problem throughout the world.