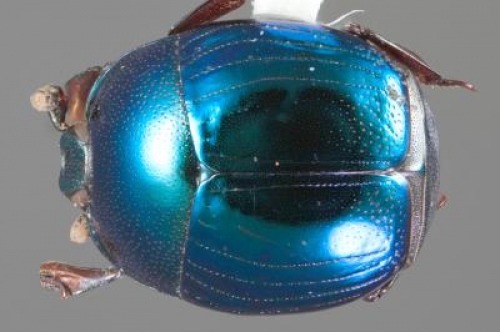 The bottomless pit of insect biodiversity has yielded a treasure trove of new species of jewel-like clown beetles. In a paper published today in the journal ZooKeys, Michael Caterino and Alexey Tishechkin of the Santa Barbara Museum of Natural History describe 85 new species in the genus Baconia, renowned for their brilliant coloration and bizarrely flattened body forms. The new species bring the genus up to 116 total species.

The new species, mainly from North and South America, were discovered through studies of numerous museum collections, as well as the authors’ own fieldwork.

”Although the genus Baconia was originally named in honor of Francis Bacon the Elizabethan philosopher, Francis Bacon the experimental artist would also be a fitting namesake for these fantastic beetles.”, says the study’s lead author Caterino.

While many groups of beetles are known for spectacular color patterns, they are rare and little-appreciated in the clown beetle family, Histeridae. ”Even beetle specialists are amazed by the fantastic colors of Baconia.’‘, observes Caterino. What purposes the colors may serve, however, remains a mystery. ”In natural history terms, the species of Baconia aren’t very different from several other groups of clown beetles with similar habits, but much duller coloration.”

Their beautiful bodies conceal a vicious disposition, as the species are mostly believed to stalk and eat wood-boring beetles and their larvae. Some are even drawn to pheromones of bark beetles, using their own seductive odors against them. The flattened bodies of many of the species let them pursue their prey deep under the bark of recently killed trees.

That the little jewels remained hidden for so long may be partly attributed to their extreme rarity. Although more than 20 museums’ collections were assembled for the study, nearly half the species are still known from only one or two specimens. ”Biodiversity science is humbling.”, admits Caterino. While the study provides a wealth of new data on a neglected group of beetles, ”We know it’s still the tip of the iceberg.”

”Our greatest hope is that by calling attention to the existence of such exquisite creatures, we will inspire others to go out and seek out new populations and data.”

This study was part of a large scale study of clown beetle diversity, funded by the U.S. National Science Foundation.