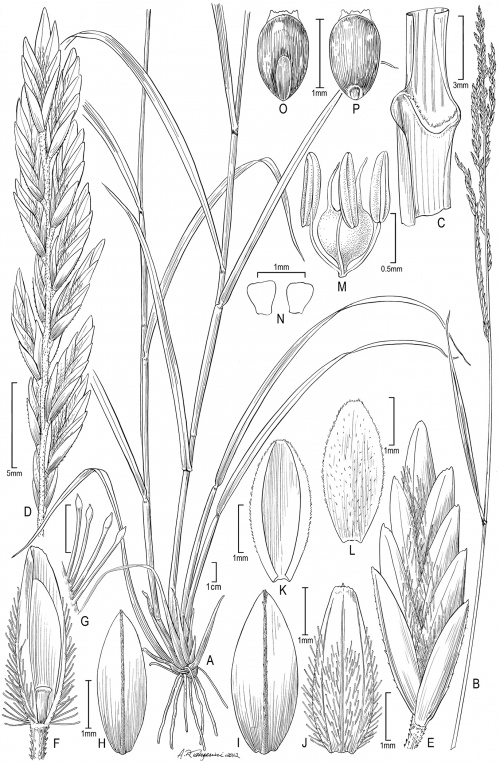 The kinds of traits that show genealogical relationships between species are often minute and easily overlooked.

Dr. Neil Snow, a botanist at Pittsburg State University, published a paper in 1996 that included observations of some odd-shaped hairs on three species of grass native to Africa. Their odd shape stems from distinctly swollen tips that are then pinched into a small party-hat structure at the very apex.

“A tongue-twisting technical term for that shape is ”clavicorniculate”, but ”club-shaped” is a workable simplification we often prefer.”, remarked Snow.

In 2011, Drs. Paul Peterson and Konstatin Romaschencko, working at the Smithsonian Institution, used DNA sequences to determine that the 3 African species are related to an American species that lacks the odd-shaped hairs.

“Nobody previously anticipated a close relationship between the African and American species, particularly since the American species lacks the odd hairs.”, explained Dr. Snow.

“However”, added Snow, “the DNA data supporting this relationship is quite robust.”

The 3 authors just published a monograph in PhytoKeys, which places the four species together for the first time in a genus called Disakisperma.

“Our research is a good example of how big, bright, flashy or sexy traits are not always the ones that help solve taxonomic puzzles.”, concluded Snow.