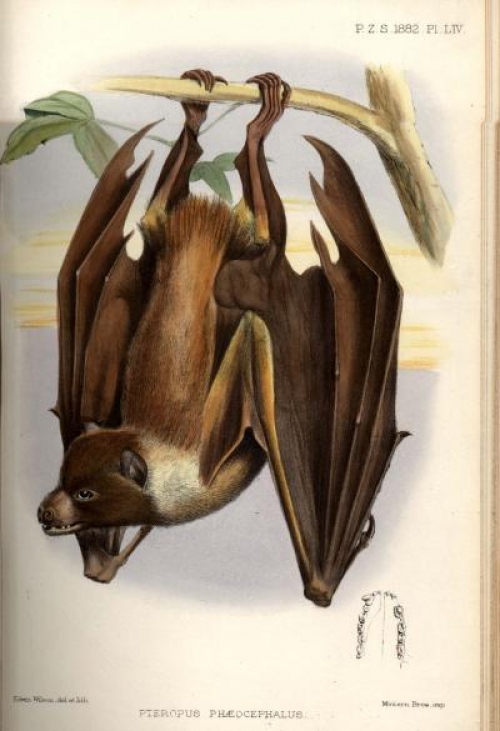 A specimen preserved in a jar of alcohol in The Natural History Museum, London has remained the only record of the Mortlock Islands flying fox, one of the least known bat species on the planet, for over 140 years. That is until now. A team of bat biologists led by Dr. Don Buden from the College of Micronesia has collected new information about this “forgotten” species, and studied it in the wild for the first time. The study is reported today in the open access journal ZooKeys.

The original London specimen was collected in 1870 from the remote Mortlock Islands, a series of low-lying atolls and part of the Federated States of Micronesia in the west-central Pacific Ocean. British biologist Oldfield Thomas used this specimen to name the species Pteropus phaeocephalus in 1882. However, information uncovered by Dr. Buden proves that a German naturalist, voyaging on a Russian Expedition, got there first.

“We found a report written by F.H. Kittlitz in 1836 describing his expedition to the Pacific Islands in the late 1820s. In that report he describes the flying-foxes of the Mortlocks and names them Pteropus pelagicus. This means the species was named long before Thomas’s description in 1882.” said Buden.

According to internationally established rules for naming animals, the earliest available scientific name of a species must be officially adopted, so the Mortlock Islands flying fox is now correctly known as Pteropus pelagicus. Not only does Kittlitz correctly deserve credit for the discovery of the species, 50 years earlier than previously thought, but he can also be now credited for the “new” name. Furthermore, Buden and colleagues demonstrated that flying foxes from the nearby islands of Chuuk Lagoon, long regarded as a separate species (Pteropus insularis), are also best regarded as a subspecies of Pteropus pelagicus, showing that the species has a wider geographic distribution than previously realized.

New fieldwork in the Mortlock Islands revealed more than name changes. The ZooKeys article describes the first study of the behavior, diet, and conservation status of this flying fox, finding that the Mortlock Islands support a small population of 900 to 1200 bats scattered across a land surface of only 12 km2 (4.6 square miles). Legal rules have brought better protection to the species, which was once heavily hunted. But the future of the species is still uncertain in its island home. Rising sea levels, generated by climate change, threaten the flying foxes’ habitat and food resources through flooding, erosion, and contamination of freshwater supplies.

“This remarkable study shows how much we have to learn about Pacific Islands mammals. “said Prof. Tim Flannery of Macquarie University in Sydney, who was not involved in the research. “Where there was darkness, Dr. Buden and colleagues have shed light.”

Co-authors of the ZooKeys study included Dr. Kristofer Helgen of the Smithsonian Institution in Washington, D.C., and Gary Wiles of the Department of Fish and Wildlife, Washington State.