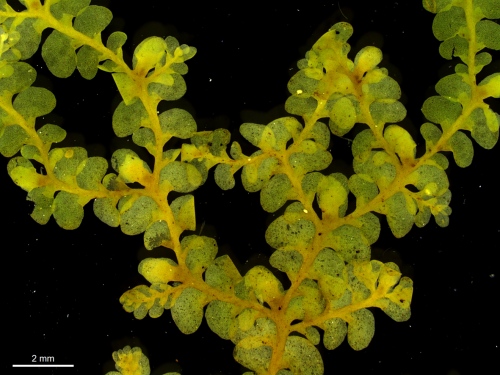 The supposedly widespread and variable Australasian liverwort species Radula buccinifera is nothing of the kind. The species was described in 1844, and reported for New Zealand in 1855. It has gone on to be the most commonly collected species in both countries, yet it doesn’t even occur in New Zealand, according to results of research led by Dr Matt Renner at Royal Botanic Gardens & Domain Trust.

Molecular and morphological evidence show that what was thought to be one species of leafy liverwort from Australia and New Zealand is in fact eight different species, and five of these are new to science. The study was published in the open access journal PhytoKeys.

The species is an Australian endemic restricted to the wetter parts of the south-east of the country. Records from the tropics are referable to other species, two of which are found only there. Another two species are endemic to Australia, and a third is shared between Australia and New Zealand. The species may have been confused because many appear similar, and are variable so overlap in form.

Better understanding of species diversity has implications for studies of biogeography, in that this ‘widespread species’ is actually a complex of geographically restricted species. Liverworts also contain many bioactive compounds, which exhibit a range of activity including anti-microbial and anti-retroviral properties, and the greater the recognized species diversity the greater the pool of potentially useful molecules.

“There may be no direct application of this research unless you are identifying liverworts, but direct application is only one kind of benefit, and solid taxonomic studies have many, the least of which is that we learn what is out there in the world around us.” comments the lead author Dr. Matt Renner.