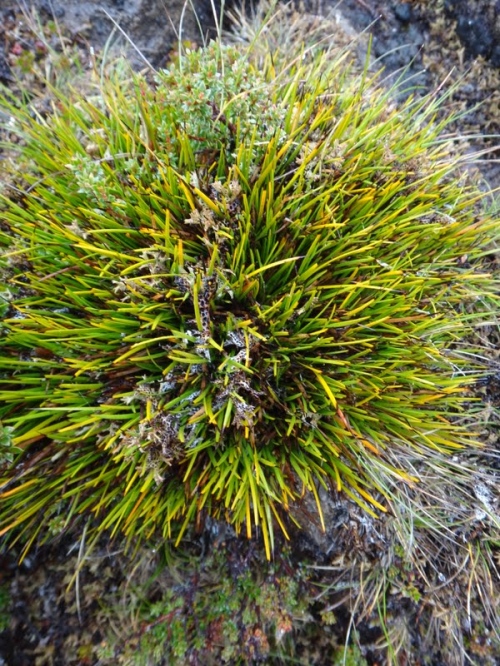 Researchers from the University of New England (Australia) and the Royal Botanic Gardens and Domain Trust, Sydney (Australia), have discovered a high-altitude species of sedge from south-western Tasmania. A small clumping plant, Lepidosperma monticola grows on mountains including Mount Field and Mount Sprent. It is unique in the genus in being the only species essentially restricted to alpine vegetation. At less than seven centimeters tall, this Tasmanian endemic is also the smallest known species of Lepidosperma.

Mr. Plunkett, who is undertaking a PhD on Lepidosperma, first discovered the new species amongst herbarium specimens on loan to the N.C.W. Beadle Herbarium from the Tasmanian Herbarium. A field trip to Tasmania to collect additional material, observe the species in the wild and examine relevant collections at the Tasmanian Herbarium provided further evidence supporting the recognition of Lepidosperma monticola as a new species. Analysing the morphological and anatomical attributes of the plants demonstrated conclusively that L. monticola is a distinct species in need of formal recognition.

Species of the genus Lepidosperma, commonly known as sword-sedges, mostly have elongate, flattened leaves that are shaped like a double-edged sword. Many also possess sharp, cutting leaf margins, alluding to this common name. The genus with more than 100 species is widespread across Australia. It is of particular ecological interest because its fruits are removed by ants after falling. The authors are also working with colleagues from University of Sydney to investigate the taxonomic value of aromatic resins, which also appear to have therapeutic value.

Most species of Lepidosperma occur in open forests, woodlands and heath, and some in swamps, but L. monticola is essentially restricted to alpine vegetation. All known populations of this new species occur above 700 m altitude. Individual plants are often inconspicuous, growing in the crevices of rock outcrops. Other individuals form attractive rounded clumps up to about 20 cm in diameter intermingled with mosses and lichens.

Lepidosperma monticola is somewhat similar to a previously named species, L. inops, which grows at lower elevations. The two species can be readily distinguished by traits such as fruit morphology. Ongoing work by the authors and collaborators is likely to uncover additional undescribed species of Lepidosperma.