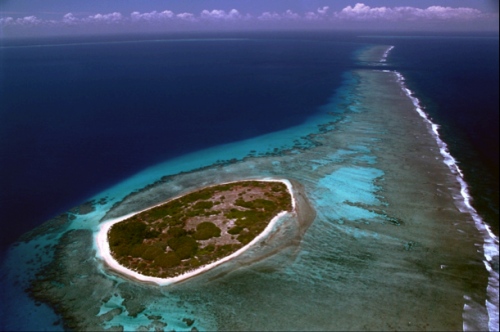 Sea level rise caused by global warming can prove extremely destructive to island habitats, which hold about 20% of the world’s biodiversity. Research by C. Bellard, C. Leclerc and F. Courchamp of the University of Paris Sud look at 3 possible scenarios, from optimistic to very pessimistic, to bring attention to the dangers in store for some of the richest biodiversity hotspots worldwide. The study was published in the open access journal Nature Conservation.

Despite climate change having received considerable attention in recent years, no global assessment of the consequences of sea rising is available for island ecosystems. Yet those are amongst the regions most vulnerable to potential sea level rise, which in their case would cause a direct reduction of habitat.

Several recent studies strongly suggest that sea levels will rise substantially until the end of the century, with estimates ranging from 0.5 m to 2.3 m increase. Worst case scenarios of ice sheet melting and sliding lead to estimates of sea-level rise of the worrying 4 to 6 m. Such increases could lead to the immersion of very large proportions of many islands with low elevation. In many cases, sea level rise may lead to their total submersion, wiping out completely self-contained ecosystems and their inhabitants .

The study uses the 1,269 islands from different areas that France harbored, out of which, New Caledonia and French Polynesia are found to be the most vulnerable to sea level rise. The French maritime domain is ranked as the second most important in the world, these islands in total holding a large proportion of the world’s biodiversity. Research shows that 5% of the number of islands could be permanently inundated under an increase of sea level by 1 meter. This figure dramatically rises to 8% and 11%, in the more pessimistic scenarios, respectively, for 2 and 3 meters of sea level rise. Assuming that French islands are representative of worldwide islands, roughly 10,800 islands could be entirely lost in the 1 meter scenario, the most optimistic one.

For the New Caledonia hotspot, under the worst scenario, up to 6.8 % of the islands could be half submerged. Speaking in terms of biodiversity loss, this indicates endemic plant species that are already at risk of extinction will be the most vulnerable to sea level rise.

“Losses of insular habitats will thus be relatively important in the future, probably leading to a major impoverishment of insular biodiversity. Given the implications of these results, decision makers are required to define island conservation priorities that accounts for sea level rise following climate change.”comments the lead author Dr. C. Bellard.