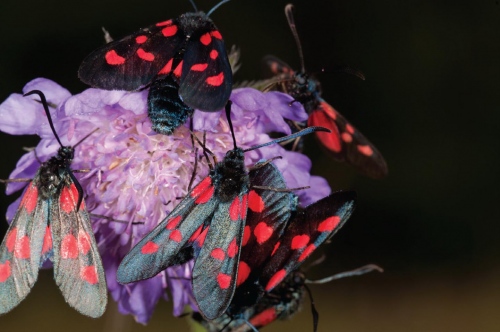 Currently, butterfly populations in many countries decline at alarming rates. Many of these populations are closely associated with the agricultural landscape. Changes in farming practices and land use can therefore have far-reaching consequences for the success and persistence of the butterfly fauna. A research team from Sweden and Germany have now reviewed effects of land management on butterfly diversity using historical and current surveys during the last 100 years.

The study focuses on systematic surveys of butterfly population trends and extinction rates in southern Swedish agricultural landscapes. In some areas, half of the butterfly fauna has been lost during the last 60-100 years. The study is published in the journal Nature Conservation.

Land use in these parts of northern Europe has changed markedly with key butterfly habitats such as hay meadows disappearing at alarming rates. Grazed, mixed open woodlands have been transformed into dense forests and domestic grazers have been relocated from woodlands to arable fields and semi-natural grasslands. Hay and silage harvest now start much earlier in the season which reduces the time available for larval development. The changed and intensified land use has also markedly reduced the availability of nectar resources in the landscape. Adding to these problems, current agricultural subsidy systems favour intensive grazing on the remaining semi-natural grasslands, with strong negative effects on butterfly diversity.

While the documented changes in farming practises and land use are problematic for the butterfly fauna, relatively minor adjustments to land management have a potential of drastically counteracting these effects. In order to mitigate risks of further species loss and to work towards recovery of threatened butterfly populations, the review ends by recommending twelve management measures favourable for many butterflies. Examples include later grazing, rotational grazing with parts of semi-natural grasslands grazed only in late summer in some years, and careful choice of grazers.

The research was jointly funded by the European Union FP7 STEP-project (grant 244090–STEP–CP–FP; Potts et al. 2011) Lund University, and the Swedish Environmental Protection Agency (contract 2227-13-003). It is part of the strategic research area Biodiversity and Ecosystems in a Changing Climate, BECC.