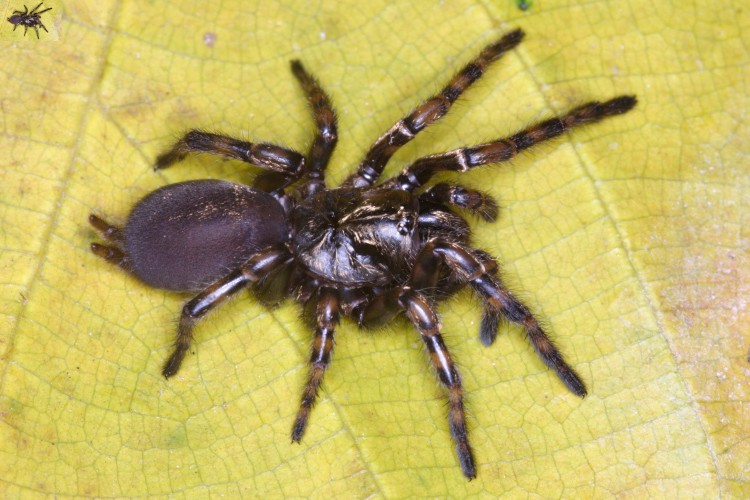 Scientists discover three new gorgeous species of the wafer trapdoor genus Fufius – F. minusculus, F. jalapensis, and F. candango. The discovery of the three new species, published in the open access journal ZooKeys, paves the road to understanding the morphological variability of the species in this little known mygalomorph genus.

The family Cyrtaucheniidae is a widespread family of spiders, known also as wafer trapdoor spiders. Many, but not all, make wafer-like doors to their burrows, while others build the cork-like doors found commonly in the true trapdoor spiders. Little is known about the biology of the enigmatic genus Fufius, but among the curiosities is that instead of burrows these spiders live in silken tubes in crevices, carefully prolongued with silk.

The mygalomorph neotropical genus Fufius comprises ten species, widely distributed distributed from Guatemala in Central America to southeastern Brazil, in South America. This new study describes three beautiful new species from Brazil, alongside the re-description of the previously known F. funebris and the first description of a female F. lucasae.

“What is curious about the genus Fufius is the wide distribution of the species. Normally, mygalomorphs have a very restricted distribution. Furthermore, the genus has species living in contrasting environments as the Amazon, Savannah, and Brazilian Atlantic forest. This makes the genus a potential model for biogeographic studies.” comments one of the authors Dr. Rogerio Bertani.

“The relationship with other mygalomorph spiders is also unclear, and several authors considered the genus to belong in very distinct families. The 3 new species described in the paper as well as the redescription of an old species and the description of a female of another species formerly known from male specimen aids in understanding the morphological variability of the species in this little known mygalomorph genus.” concludes Dr. Bertani.