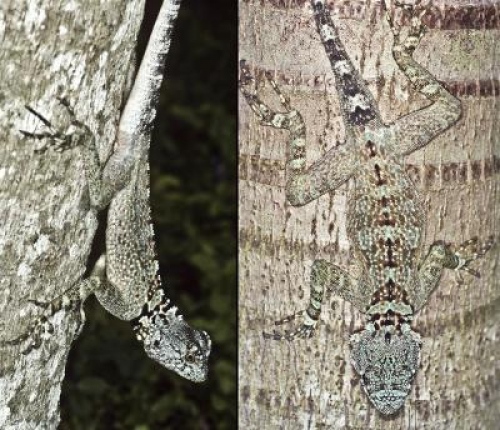 The lowland tropics were once though filled with widespread species, while moderate and higher elevations were thought to contain species with more restricted distributions. That idea is turning out to be partially incorrect. Widespread species now appear to be the exception, instead of the rule. A new study describes four species once considered to be the collared treerunner, a lizard known to the scientific community as Plica plica. The study was published in the open access journal ZooKeys.

The collared treerunner was originally described in 1758 and has been the subject of many biological, ecological, and behavioral studies in recent years. A new ZooKeys paper by John C. Murphy, Field Museum (Chicago) and Michael J. Jowers, Estación Biológica de Doñana (Sevilla, Spain) describe four new species formerly thought to be one.

“The collard treerunner was considered a single species ranging from Trinidad and Tobago and northern Venezuela southward into the Amazon Basin, south of the Amazon River.” Murphy said. ” The Treerunners ancestor diverged about 25-30 million years ago, and throughout this time the South American continent has undergone dramatic remodeling, including the rise of the Andes, rising and falling sea levels, and changing climates that isolated populations for long periods of time, allowing them to become new species. Treerunners live on vertical surfaces, such as tree trunks, rock walls, and even buildings and they eat a variety of insects.”

The new paper focuses on populations of this lizard in northern South America, but in an overall survey the authors examined specimens from across the Amazon basin and suspect there may be at least another five to seven undescribed species in what is currently considered the collared treerunner. The treerunners from Trinidad and northern Venezuela were 4.5% genetically different from those in southern Venezuela, and more than 5% different from those in Brazil. For comparison purposes humans and chimpanzees are less than 2% genetically different.

Unraveling cryptic species is important for a more complete understanding of biodiversity, evolution, and for long term conservation efforts.

The take home message here is that there are many more species of squamate reptiles (lizards and snakes) in the world than previously thought, and it is likely many species have and will disappeared before science is even aware of them. Cutting forests and draining swamps undoubtedly causes extinctions of the species depending upon those habitats. While none of the treerunners described in this paper are likely to be threatened with extinction this discovery and many other similar recent discoveries suggest our knowledge of biodiversity is lacking.