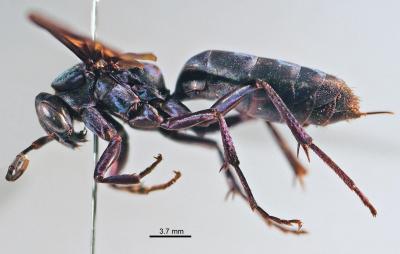 Two new beautiful wasp species are added to the rare pompilid genus Abernessia, which now contains a total of only four known species. The two new species A. prima and A. capixaba are believed to be endemic for Brazil alongside the rest of the representatives of the genus. Both wasps are distinguished by the large size (almost 3cm in length) and the beautiful black color with metallic shine typical for the family. The study was published in the open access journal ZooKeys.

The enigmatic genus Abernessia is part of the spider wasp family Pompilidae. Spider wasps take their name from the preference of the representatives to parasitize spiders. The females paralyze the prey by stinging it, which is then put in a specifically built nest. The female then lays a single egg on the abdomen of the spider and bury it carefully marking any signs that might give away the nest.

Interestingly it is believed to have a connection between the sizes of prey and size of the offspring of the wasps, the lager wasps are believed to appear from nests containing larger prey.

“There is a positive correlation between size of the spider preyed and size of the wasp produced in the next generation.” comments Dr. Waichert, Utah State University.