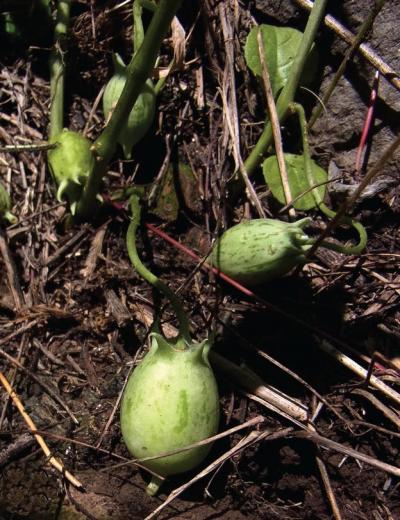 For many decades, researchers thought the closest relatives of papaya were certain trees from the Andes, the so-called highland papayas. A study employing DNA sequences from all species of the papaya family instead revealed that the closest relatives of papaya are three herbaceous species and a small tree with stinging hairs occurring from Mexico to Guatemala and El Salvador. The stingy-haired tree in fact is only known from cloud forests in the Sierra de Juarez in Oaxaca, southern Mexico.

The three herbaceous species are well known to Mexicans living in the area, and Mexican botanists had figured out their correct names some time ago. This was overlooked, however, in the most recent treatment, resulting in an erroneous merging and choice of names of two species.

In a paper published in PhytoKeys, Carvalho and Renner clarify the species boundaries, illustrate the least known species, and provide a key to all taxa comprising the papaya sister group.

“Before our studies the closest relatives of papaya were known only by local people living along the areas where these plants are growing. These people could never imagine they were eating a close relative of the famous papaya because the fruits and leaves are very unlike.”comments Dr. Carvalho. “For some people is hard to believe that the highland papayas from the Andes are not closer related to papaya than are these Mesoamerican herbs. However, the fact that the closest relatives of papaya are endemic to Central America coincides with the distribution of the wild-form of the crop, which has much smaller fruits and thinner pulp than the ones we can buy in supermarkets.”