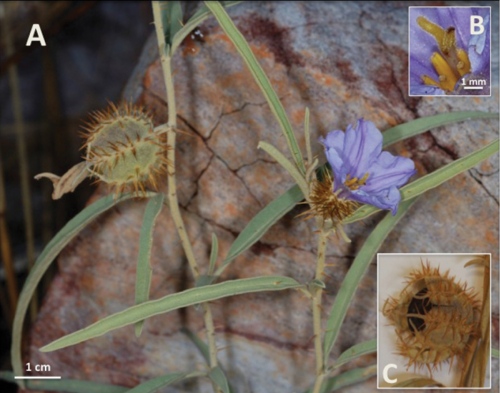 Bucknell professor Chris Martine never expected to be working with his mentor on identifying a new wild eggplant in Australia, especially since Martine’s former colleague passed away years ago

Martine described the plant as “gender bending,” and explained that the females actually pretend to be male by producing pollen.

“What they’re really doing is duping bees into visiting their flowers.” Martine said. “One of the things we’re going to do next is study what that means. Do the bees actually get anything from this fake pollen? And, if they don’t, that means the plants are actually tricking the bees into doing their bidding, which would be a really neat thing for a plant to do.”

Listed as a co-discoverer is David Symon, who mentored Martine while he was pursuing his doctorate in the early 2000s. Martine’s graduate research focused on varieties of wild eggplants in Australia — Symon’s area of expertise. The two began a long-distance correspondence, with Martine sending Symon emails and Symon, who at the time was nearly 90, returning handwritten replies by mail. In 2004, they teamed up on a field expedition to search for new plant species in the Outback.

After the research trip, the two parted ways. Martine traveled with another group of researchers to Western Australia, and Symon stayed behind to examine specimens in Australia’s Northern Territory Herbarium. It was the last time they would ever see each other.

Martine continued his work in Australia in 2009, which is when he first came across what is now known as Solanum cowiei. While DNA tests confirmed that the plant was an unknown species, Martine lacked the flowers he needed to assign it a scientific name.

Martine returned to Australia for a third time last May, hoping to find the elusive eggplants in bloom. He traveled to Litchfield National Park, where Martine had previously spotted the species. A wildfire had recently scorched the area, making it easier to pick out green sprouts amidst the gray and brown landscape. Combing through the brush, Martine found the wild eggplant with budding flowers.

“If I was capable of doing backflips, I would have done them,” Martine said. “The only issue was that this was supposed to be our last day in the field and not a single bud had opened. We extended our time in the bush and camped out for two more nights, but they never opened.”

Martine made his way back to the Northern Territory Herbarium, the same place he had last worked with Symon a decade earlier. He was elated to discover specimens of the plant with flowers on them. The find meant he could return to Bucknell to complete his description of the new species.

A day before heading home to America, Martine decided to dig deeper into the herbarium’s archives, hoping others had come across the mystery plant and recorded their own observations. He was shocked by what he found: some dried specimens, and a page of handwritten notes that Martine easily recognized from his correspondence so many years ago. Unbeknownst to Martine, his mentor Symon had started describing Solanum cowiei after their trip together in 2004; it is the first known attempt to describe the eggplant Martine is now credited with naming.

“I knew right away that the notes were David’s — and I can say without exaggeration that finding them gave me the chills.” Martine said. “Of course, then all I could do for a good ten minutes was sit there with a big smile on my face, shaking my head; he had beaten me to it.”

But Symon was never able to describe the species.

“He likely stopped short of publishing the new species for the same reason I have until now.” Martine explained. “Under the heading ‘female flowers’ he wrote – not seen. ”

The name Solanum cowiei is in honor of botanist Ian Cowie of the Northern Territory Herbarium, who first showed Martine dried specimens of the formerly undescribed species. Also listed as an author on the recent publication is Bucknell University professor Elizabeth Capaldi Evans, who traveled to Australia with Martine in May, 2013.