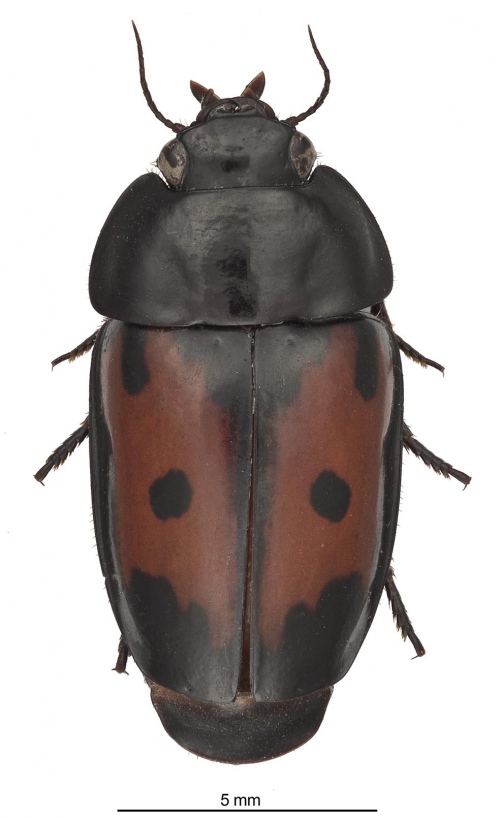 Scientists from the Smithsonian Institution describe the Spectacular Guyane False-form beetle, or Guyanemorpha spectabilis, from Guyane (French Guiana). As its name suggests, the newly discovered species stands out among its dull relatives in the Western Hemisphere, with its great size and beautiful coloration. The study was published in the open access journal ZooKeys.

“This surprising large and colorful pseudomorphine came as a shock to me, as all other species of the Tribe in the Western Hemisphere are quite dull brown, dark reddish, or blackish with no, or little, color contrast on the upper surface.” explains the author Dr. Terry L. Erwin. “In the world of entomology this new species can be only compared in its rare characteristics to the Olinguito, a new carnivore species which charmed the world and just recently described by Kris Helgen in ZooKeys. ” he added.

The new species belongs to the Pseudomorphini Tribe, famous for the co-existence of its representatives with various ant species. Members of G. spectabilis occur at lowland rainforest sites in French Guiana and are accordingly most likely to live with ants, although at present nothing is known about their way of life.

“The pseudomorphines are a very interesting evolutionary off-shoot of the normal carabid morphotype in both form and function and are only just now beginning to be understood in North America. The fact that species of related genera in South America are living with arboreal ants will make learning about them far more difficult. Insecticidal fogging gets adults of these species, but only tearing apart arboreal Azteca ant nests while suspended in a tree will produce their larvae, and that is not for carabidologists faint of heart.” explains the author Dr. Erwin, and his Intern, Lauren Amundson.