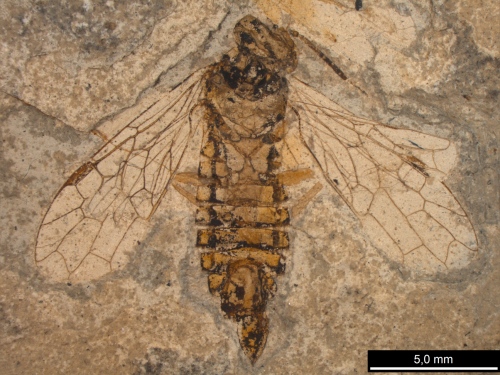 Wasps, bees, ants and relatives comprise the megadiverse insect order Hymenoptera, the third most speciose animal group on Earth, far surpassing the number of known vertebrate species. All the four most diverse orders of animals (beetles, butterflies, wasps, and true flies) belong to the group of insects with complete metamorphosis, i.e. having a dormant pupa, jointly known as Holometabola. Other holometabolans are lacewings, alderflies, dobsonflies, snakeflies, scorpionflies, fleas, and caddisflies. Hymenopterans are currently regarded as a very old lineage, which had been the first to separate from the holometabolan stem, the view supported by molecular evidence.

Eighty years ago the Russian entomologist Andrey Martynov—well known for naming the two major divisions of winged insects Palaeoptera and Neoptera, stressing the importance of the wing folding pattern for insect evolution—suggested that wasps had arisen from snakefly-like ancestors.

New fossils, which are 260–270 million years old, support his view, firmly attaching the wasp lineage to the lacewing (neuropteroid) branch of the holometabolan family tree and dating its origin no earlier than Late Permian. These fossils are the oldest known Megaloptera: alderfly-like Parasialidae, and a newly discovered closely related family Nanosialidae.

Dr. Dmitry Shcherbakov, a fossil insect specialist at the Arthropoda Lab, founded by Martynov at the Borissiak Paleontological Institute, Russian Academy of Sciences, Moscow argues that parasialids gave rise to both wasps and nanonosialids, and the latter became the ancestors of snakeflies. Living alderflies, dobsonflies, and snakeflies represent remnants of the past diversity of archaic neuropteroids, which presumably had diverse lifestyles. The study was published in the open access journal ZooKeys.

Parasialids were small to medium-sized; nanosialids were minute creatures 3–5 mm long and probably fed on jumping plant lice, common in the same fossil fauna. The earliest wasps, known from the mid-Triassic (about 240 million years ago), were rather small, too. “It appears that, early in their history,” the author says, “the lineages of Megaloptera, Raphidioptera and Hymenoptera experienced miniaturization, which profoundly and irreversibly affected their body structure.”

The study was supported by the Russian Foundation for Basic Research (project 13-04-01839).